During a 30-minute meeting with her legal team, Suu Kyi appeared to be in good health, though she said she had no access to newspapers when detained and was only marginally conscious of what was going on outside, as per Khin Maung Zaw, the head of her legal team. 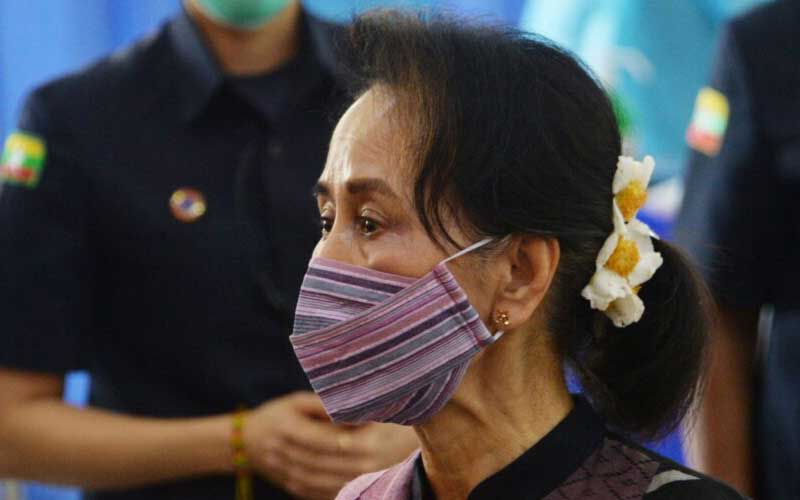 Myanmar's deposed leader Aung San Suu Kyi attended a court hearing for the first time on Monday, her lawyers said, about four months after her government was overthrown by the military.

During a 30-minute meeting with her legal team, Suu Kyi appeared to be in good health, though she said she had no access to newspapers when detained and was only marginally conscious of what was going on outside, as per Khin Maung Zaw, the head of her legal team.

Reportedly, more than 4,000 people have been arrested since the Feb. 1 coup, including the ousted leader, 75, who received the Nobel Peace Prize in 1991 for her efforts to establish democracy. She faces allegations ranging from unlawfully carrying walkie-talkie radios to breaking a national secrets statute, which entails a 14-year jail sentence.

Since the army took over, Myanmar has been in upheaval, with regular rallies, marches, and strikes against the junta taking place throughout the country. According to the advocacy organisation Assistance Association for Political Prisoners, it has retaliated with deadly force, killing over 800 people.

In a meeting with her lawyers, Suu Kyi expressed her wishes for people's well-being and alluded to her National League for Democracy (NLD) party, which could be disbanded shortly.

"Our party grew out of the people so it will exist as long as people support it", Khin Maung Zaw quoted Suu Kyi as saying.

As per media reports citing a commissioner, Myanmar's junta-appointed election commission will dismantle the NLD on the grounds that its win in a November election was won by fraud. The previous electoral commission had denied the allegations.

The commissioner even threatened to take action against those who were "traitors" in the case.

According to Khin Maung Zaw, Suu Kyi said the only outside detail she got was when police asked her opinion on some issues. He said she declined to react because she was unsure of the whole situation.

He further added that the legal team have met with the ousted president and co-defendant Win Myint to resolve the cases against him.

The presiding judge adjourned the trial until 7th June to allow defendants to speak with their attorneys, according to the advocate.

Min Aung Hlaing, the junta leader, said Suu Kyi was in good health in his first interview with international media after the coup, disputing the number of civilians killed by security forces in demonstrations after the coup.

In a 20th May interview, General Min Aung Hlaing said that the total number of casualties was about 300, with 47 police officers also killed.