Suu Kyi will appear soon, as per Myanmar's junta leader

In his first interview since overthrowing deposed leader Aung San Suu Kyi in a February 1 coup, Myanmar's junta leader Min Aung Hlaing said she was healthy at home and would appear in court in a few days. 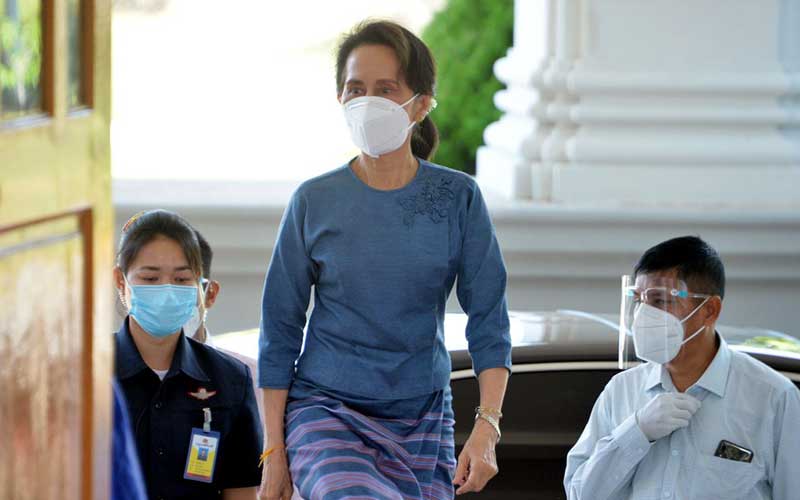 In his first interview since overthrowing deposed leader Aung San Suu Kyi in a February 1 coup, Myanmar's junta leader Min Aung Hlaing said she was healthy at home and would appear in court in a few days.

The nation in Southeast Asia has been thrown into turmoil as a result of the coup. In a northwestern jade mining area, an ethnic armed group opposed to the ruling junta attacked a military post, while other violent incidents were reported from other parts of Myanmar.

Suu Kyi, who won the Nobel Peace Prize for her long fight against previous military rulers, is one of over 4,000 people detained since the coup. She is accused of secretly owning walkie-talkie radios as well as breaking a state secret statute.

"Daw Aung San Suu Kyi is in good health. She is at home and in better health. In a few days, she will stand trial in a courtroom" in excerpts released on Saturday, Min Aung Hlaing said via video link with Hong Kong-based Chinese language broadcaster Phoenix Television on 20th May.

The interviewer questioned him what he thought of Suu Kyi's success in the country of 53 million people, where she is widely respected for her campaign that brought tentative democratic reforms that were cut short by the coup.

Min Aung Hlaing responded, "She tried everything she could."

He repeated that the army had seized power as it had discovered fraud in an election contested by Suu Kyi's party in November, even though the then-election commission had dismissed its allegations.

He said that the army would hold elections and that future constitutional amendments had been found and would be implemented if they were "the people's will."

Suu Kyi's next trial date is scheduled for Monday in Naypyidaw, Myanmar's capital. So far, she has only appeared via video link and has not been permitted to talk directly to her lawyers.

The junta has cited security concerns for not allowing her to talk privately with her lawyers at a time when the military authorities have yet to establish control of the country in the face of regular demonstrations, strikes, and renewed insurgencies.