EXCLUSIVE- “It’s a catch 22 situation, and someone needs to break this chain” Taapsee Pannu on less payments to heroines in Bollywood as compared to male counterparts

What prompts me to do this story is her spirit to speak fearlessly about the concerns actresses face in the filmdom. While she raises certain pertinent issues, she also questions about trolls who are quick to hurl sexual invectives on women/actresses on social media freely and scoot away, as compared to men who are largely spared. This certainly, is a thing to ponder on 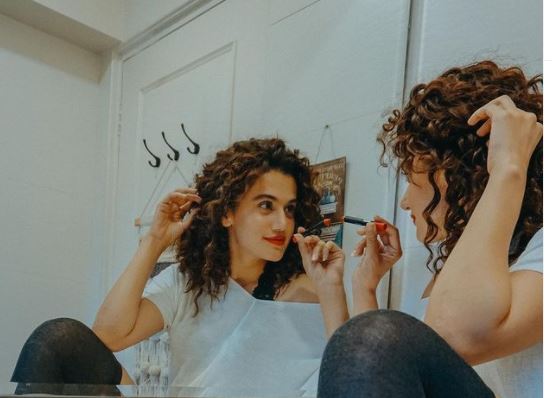 “For now, I am a knock in your eyes, I would be a beat of your heart, someday soon, (अभी आँख में खटक रहीं हूँ तो क्या , कभी तो दिल में धडकूँगी … ), is Bollywood’s fastest emerging finest actor and superstar Taapsee Pannu’s tagline/slogan of her instagram.

And she lives up to that, for some as the knock of the eye and for saner minds, as a beat in the heart. Just two days ago, she proved the latter, once again.

This time, it was for her fellow colleague Kareena Kapoor Khan who is known to have demanded Rs.12 crore for the role of Sita that she has been offered in Alaukik’s Desai’s period saga based on the recreation of the previous Ramayana. The moment Khan demanded the amount allegedly, she was trolled by certain ‘categories’ of twitterati/ paid trolls for “hurting their religious sentiments” (sic) as the work she would have been doing is “For humanity”!

Despite being heavily trolled and hurled with objectionable phrases, Kareena didn’t respond back immediately, but Taapsee Pannu, true to her guts, was the only one to stand up for her the very next day, (yesterday early evening).

She furiously reacted on her twitter and asked "Why not?" adding if a male artiste had asked this much amount, people would have said, his market rate have gone up; “Iski market value badh gayi hai.” she quipped.

She is known to have spoken to few media houses further alleging if a woman asks for an amount worth her salt, she is labelled as being “too difficult” and “too demanding” and that “It’s always like that.” A remuneration hike always comes up as an issue when it comes to women in the film industry.

Pannu didn’t stop there. Further defending her colleague, she also said that the lady (Khan) “is one of the biggest female superstar we have in the country”. If she demands a certain fees for her time, why not? For it is her job.

She also questioned the trolls if they ever thought that if men did those mythological characters, “they did that for free?”

I spoke exclusively to the forever agile, gallant, and responsive Taapsee Pannu about the issue today noon. What prompts me to do this story is her spirit to speak fearlessly about the concerns actresses face in the filmdom. While she raises certain pertinent issues, she also questions about trolls who are quick to hurl sexual invectives on women/actresses on social media freely and scoot away, as compared to men who are largely spared. This certainly, is a thing to ponder on.

Here is an excerpt from a quick chat with her today

Taapsee Punnu: Not industry. By and large this whole business is, and audience is a part of it too.

They don’t celebrate their female actors the way they do their men (actors).

RSZ: I agree. That's why female centric roles were barely penned after 50s/60s

Taapsee Punnu: Even now we struggle with budgets. Everyone hears that since it’s a female-driven film budgets will have to be slashed and that’s because our returns are always unfair in comparison to our male counter parts. And audience is a big reason behind that.

Taapsee Pannu: Yes very much! In the whole world widely. And our country is no different.

Taapsee Pannu: The numbers are skewed here as well. But honestly, I feel here the speed at which equality can be achieved is much faster than theatre. Because, here we get the same number screens and shows and reach.

RSZ: That’s notable. If a female actor asks more, does it impact the offers adversely? How big is the difference from the male actors?

Taapsee Punnu: If a female actor asks more she is termed difficult and problematic and if a man asks more it’s a mark of his success. Difference is, the men who started with me earn 3-5 times more than what I do. And the gap keeps increasing as we go in higher star category.

RSZ: Actually, it’s an unorganized industry, run by, sorry but often, builders as financiers, for whom women were never considered at par with them. It’s all about that mentality

RSZ: Do any make directors stand with you on this? And are female directors any different?

(Taapsee has worked with utterly sensible filmmakers like Anubhav Sinha in Mulk and Thappad and Aniruddha Roy Chowdhury’s Pink. While she now is working with Rahul Dholakia for Shabash Mithu, Do Baraa with Anurag Kashyap and Tadka by Prakash Raj and many more.

Also Read - Exclusive – The Haseen Dillruba Taapsee Pannu, A Girl Who Defines Her Grit, All By Herself, Minus A Manipulating Agency