Exclusive – The Haseen Dillruba Taapsee Pannu, a girl who defines her grit, all by herself, minus a manipulating agency

“If I get to know there is a role I never feel shy asking for it. It has to put me out of my comfort zone”, says Taapsee Pannu in an exclusive interview over Haseen Dilruba, to be released on Netflix coming week 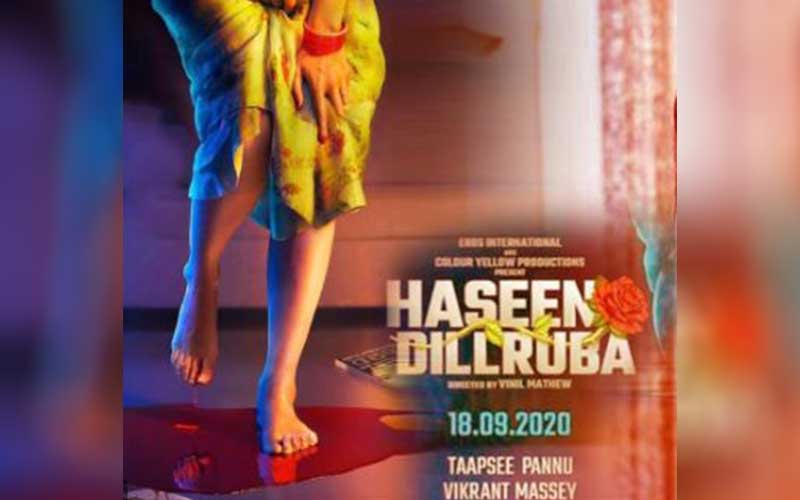 the promotional poster of the film reads a lot

This year’s July 2 witnesses actor Taapsee Pannu as “Haseen Dillruba” – the stunning heart stealer -- her latest film and first on an OTT Platform, the Netflix.

The trailer of the film released earlier this week, defines it as a romantic murder mystery, in which its lead heroine Rani Kashyap, played by Taapsee Pannu is tenacious to begin with, and a rebellious warrior towards the end. In between seems to be a story of a today’s woman, who knows the difference between a want and a need, and makes attempts to get it, after loads of thinking and utilising her young sensuousness to the hilt.

And be sure to believe it, here is Taapsee for you who minces no words admitting, she chased the role than vice-versa.

“This role gave me a lot of stress. Because I knew this was a kind of role I was looking for and it wasn’t coming my way. And when I heard its story from Kanika Dhillon (the story writer) I wanted to do it, but she had some other actor in mind. I went on a vacation and after I came back I got to know that she had already given the role to someone else.”

“But you know”, she adds, rewinding the now famous dialogue Shah Rukh Khan speaks in the film Om Shanti Om, “'Jab kisi cheez ko shiddat se chaho to poori kaynaat tumhe us sey milaane main jutt jati hai’, After exhausting all her options, Kanika came back to me. I got that role because it had to come to me”, she laughs like a child getting her favourite toy, in her case, the roles that “puts me out of my comfort zone.”

That the lady who has worked with industry stalwarts like Amitabh Bachchan (Pink) and Rishi Kapoor (Mulk) and simultaneously with silver screen new comers as her heroes like Vikrant in Haseen Dillruba, Pawail Gulati in Anubhav Sinha’s Thappad and Indraneil Sengupta in Mulk, doesn’t behave conventional either, when it comes to the hero opposite her.

“It doesn’t matter who is the hero opposite me, but the one whosoever he is, has to be good because a lot of my performance will also depend upon my co-actors.” Incidentally, this decision of not choosing the hero over her story and the role, came handy in Haseen Dillruba too.

She recalls when she reached the director of the film, on an urgent call from Kanika "I was told, we want a heroine who would not ask us who is her hero in the film,” before agreeing to the role!

So, what is this film actually about? The trailers give out parts of it but Taapsee ensures, “It is not a predicable film. It a cocktail of genres and emotions - humour, drama, romance and sensuousness” – every ingredient of a good, thinking, today’s commercial film with a story that’s every one’s but never narrated.

The film’s bigger chunks were shot at Uttarakhand before the first lockdown and the remaining ones later. “We shot it in 45 to 50 days, as the director Vinil Mathew is a relaxed and chilled film maker.

In most of my interviews with Taapsee, she has come across as a spontaneous speaker, non-manipulative and straightforward girl who has nothing to scare her or bother her. Speaking out heart’s content in an industry that is divided in visible lobbies, more in the past few years, she declares her as her own person. For this era and her age, she has already secured a position and maintained a space for herself, with a bravado, minus that activist’s approach. This thin line that she maintains, is her own limit which she chooses to be transparent about.

For instance, she gave her voice to a poignant video on migrant labourers, stood against the atrocities on students in Jamia Millia Islamia last year and supported the protesting farmers on the border, recently, Taapsee clearly isn’t on the wrong side of a thought for the nation and humanity. “But I hate the sin, not the sinner,” she clarifies, adding, “I can’t stand people who spread hate. I am not an extremist. People have lot of time to say whatever they wish to say on my timeline, but I believe in my opinions and stand by it.”

And that’s exactly what she does with roles she seeks and gets too. I reviewed her film “Chashm-e-Baddoor”, a modern remake of the old Chashm-e-Baddoor that has completed its 40 years this June. She played a bubbly girl – and dream desire for three men in the film. This role had less to do for her but she made her mark as a chirpy, young girl next door. But her next films, had much more substance to watch out for, Pink, Mulk and Thappad to name the most talked about ones.

“After Pink, someone told me that now I am a star and people would expect me to do challenging roles and that it was the ultimate and I can’t rise above that." But she took it as a challenge to rise above her last film, each time, “where film reviews read that this was best performance till now, remains my new goal”, she says matter of factly.

And that’s the reason Haseen Dillruba is on her platter. Her first on an OTT platform which she considers has given a “level playing field to new cinema where writers, directors, actors have been given a new lease of life, especially those who have been waiting for “that just one role”, have gotten them, and are now internet stars.”

With Haseen Dillruba, Netflix hopes Taapsee dawns this horizon too.

“What’s the point if people expect nothing from you”, she asks.

THE TRAILOR OF THE FILM