If this is a terrorist attack, the perpetrators must be arrested immediately and be severely punished. 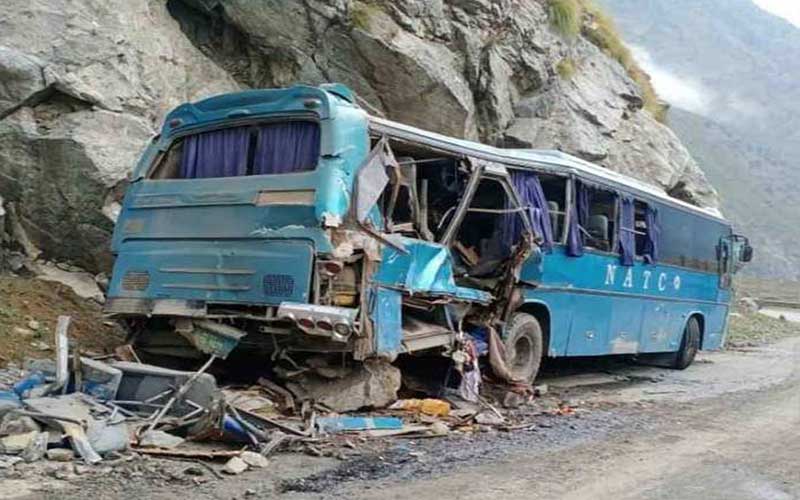 China expressed shock over a bus explosion in Pakistan that killed 12 people on Wednesday including nine Chinese citizens, and called on the South Asian country to protect projects valued at billions of dollars.

Chinese Foreign Wang Yi asked Pakistani counterpart Shah Mahmood Qureshi to quickly investigate the cause of the blast Wednesday on a bus carrying workers in the northern Kohistan region, according to a statement from China.

“China is shocked by the serious casualties of Chinese personnel in Pakistan today," Wang was cited as saying in the statement. “If this is a terrorist attack, the perpetrators must be arrested immediately and be severely punished."

Qureshi, said an initial probe indicated the explosion was an accident, not a terrorist attack, and pledged to share any outcome with China.

“Lessons should be learned from this incident and security measures for China-Pakistan cooperation projects should be further strengthened to ensure the safe and smooth operation of all projects," according to the statement.

Concerns are mounting about an advance by the Taliban in neighboring Afghanistan, which threatens to disturb peace across the region. At particular risk is the $60 billion in projects in the China-Pakistan Economic Corridor, or CPEC, a crucial part of President Xi Jinping’s wider Belt and Road Initiative.

The bus was carrying 32 people to a dam and hydro-electric project in Dasu, near the border with China, Fazal-e-Rabi, an assistant to the deputy commissioner of Kohistan, said by phone. Two security officials were among the dead, he said, without giving details of the blast. Rescue operation were lodged where victims were airlifted by ambulance.

The bus plunged into a ravine after a “mechanical failure resulting in leakage of gas that caused a blast," Pakistan’s Ministry of Foreign Affairs said in a statement on Wednesday. “Further investigations are underway. Pakistan attaches great importance to safety and security of Chinese nationals, projects and institutions in Pakistan."

An editorial in the Communist Party-backed Global Times on Wednesday said the explosion was “clearly an act of terrorism that is both carefully planned and supported by information."