The PM made the announcement after conducting an aerial inspection of the cyclone-ravaged districts of Bhadrak and Balasore in Odisha, as well as Purba Medinipur in West Bengal on the east coast. 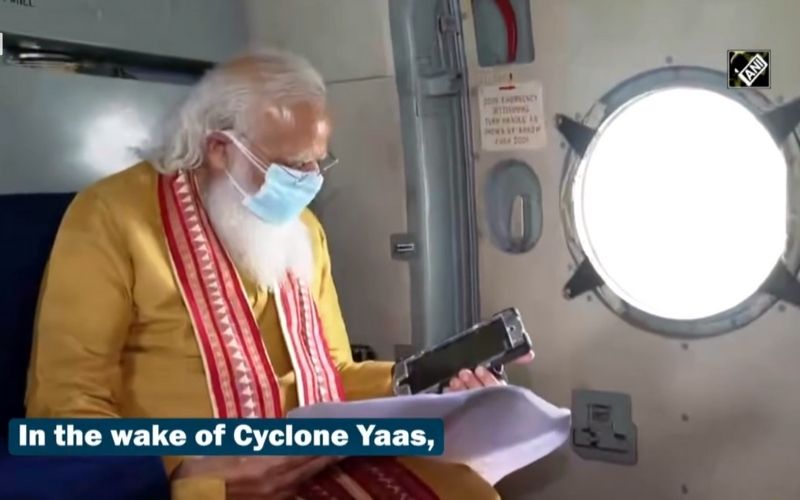 On Friday, Centre issued a financial help package of ₹1,000 crore for the states that were hit by Cyclone Yaas, that include Odisha, West Bengal, and Jharkhand, and stated a team of Union ministers will visit the three states to examine the damage, as per officials.

Prime Minister Narendra Modi made the announcement after conducting an aerial inspection of the cyclone-ravaged districts of Bhadrak and Balasore in Odisha, as well as Purba Medinipur in West Bengal on the east coast.

Officials added that although the worst-affected Odisha will receive ₹500 crore right away, West Bengal and Jharkhand will receive additional ₹500 crore based on the damage.

The central government will also send an inter-ministerial team to the Yaas-affected states to investigate the extent of the damage, and depending on the team's findings, more aid would be offered.

Also, PM Modi promised ex-gratia payments of ₹2 lakh to each deceased person's next of kin and ₹50,000 to each critically injured person in the cyclone. While the storm killed three people in Odisha, including a lady, another person perished in West Bengal.

While the Chief Minister of Odisha sought long-term solutions to the state's cyclone problems and disaster-resilient electricity networks, West Bengal's Mamata Banerjee requested a ₹20,000-crore package for reconstruction of the worst-affected regions.

On Wednesday, Cyclone Yaas slammed into areas of India's eastern coast, leaving a path of wrecked homes and flooded fields in its wake, causing more than 21 lakh people to flee to safe havens in West Bengal, Odisha, and Jharkhand.

The PM conveyed his sympathies with all those who have been affected by the hurricane, as well as his sincere sadness for the families who have lost loved ones in the disaster. He said, "We must maintain our focus on disaster management that is more scientific. As the frequency and severity of cyclonic systems in the Arabian Sea and Bay of Bengal grow, communication systems, mitigation measures, and readiness must evolve significantly."

Cyclone Yaas made landfall on India's east coast from the Bay of Bengal, several days after Cyclone Tauktae, which originated in the Arabian Sea, wreaked havoc on the western states.

The prime minister also stressed the necessity of fostering trust among citizens in order to improve humanitarian operations. He praised the Odisha government's disaster planning and management efforts, which had resulted in a low death toll.

The Finance Commission has also prioritised disaster mitigation, according to the PM, by allocating ₹30,000 crore in funds.

Furthermore, Mamata Banerjee, the Chief Minister of West Bengal, visited Modi at the Kalaikunda airfield and presented him with a report on the cyclone's damages in the state, as well as a ₹20,000 crore package for rehabilitation of the worst-affected districts.

Banerjee, on the other hand, did not attend the review meeting with Modi, which was attended by Bengal Governor Jagdeep Dhankhar, Union ministers Dharmendra Pradhan and Debasree Chowdhury, and BJP MLA and Opposition Leader Suvendu Adhikari.

Odisha Chief Minister Naveen Patnaik appreciated Prime Minister Narendra Modi for his quick visit to the cyclone-ravaged state and emphasised the importance of long-term solutions to the problem, since Odisha is routinely impacted by severe calamities such as cyclones.

"As the country is at the peak of the #COVID19 epidemic, we have not requested any urgent financial help to burden the Central Govt and would want to handle it via our own means to tide over the issue," Patnaik stated on Twitter.

According to the state's Special Relief Commissioner P K Jena, Patnaik wants both disaster-resilient electrical infrastructure and a long-term solution to safeguard the coastal region from storm surges caused by cyclones.

The chief minister stated categorically that both the Centre and the state should work together to prevent the threat of storm surge, which this time saw saltwater infiltrate over 120 villages in the coastal regions, according to Jena.