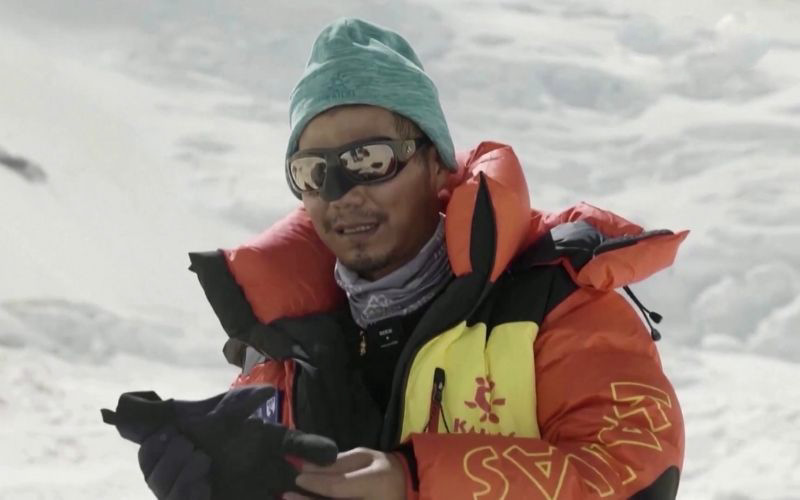 Zhang Hong, 46, became the first blind man in Asia and the third in the world to climb Mt. Everest. (Photo Credit: Reuters)

Last Sunday, 75-year-old Arthur Muir, became the oldest American to climb the summit, while 45-year-old Tsang Yin-Hung, from Hong Kong, became the fastest time ever for a woman starting from the base camp, taking only 26 hours to reach the peak, as reported previously.

However, there has been the latest addition to this list of achievers. 46-year-old Zhang Hong from China became the first blind man from Asia to accomplish it.

Indeed, three of the hundreds of climbers who have summited the mountain so far this spring are the record-breakers.

In fact, climbing Mount Everest from the Nepal side, Zhang Hong not only became the first blind man in Asia but also the third in the world to achieve it.

Many people with disabilities have aspired to climb the world's highest peak, and in fact, some have actually accomplished this by conquering the summit.

"It doesn't matter if you're disabled or not, if you've lost your eyesight or have no legs or hands," Zhang report the news agency. "As long as you have a strong intellect, you can always finish a task that others say you can't."

Zhang and three high-altitude guides achieved the 8,849-meter Himalayan feat on May 24 and returned to base camp on Thursday.

Zhang, who was born in the Chinese city of Chongqing in the southwest, went blind at the age of 21 owing to glaucoma.

Erik Weihenmayer, a blind American mountaineer who conquered Everest in 2001, encouraged him, and he began training with his mountain guide friend Qiang Zi.

Despite a spike in coronavirus cases in Nepal and Everest base camp since mid-April, they have managed to do so.

Mount Everest was reopened to foreigners in April after being closed due to the coronavirus pandemic last year.

The Nepali government decided in January 2017 to prohibit double amputees, those without arms and legs, and anyone who are blind from attempting to climb the world's highest peak.

However, in March of the same year, Nepal's Supreme Court ordered that the government's limitation on individuals with impairments climbing Mt. Everest not be implemented.

Moreover, thanks to the court ruling, Chinese climber Xia Boyu, who lost both legs to frostbite on Mt. Everest more than four decades ago, summited the world's highest peak in May 2018.