A fine of Rs 10 lakh 75 thousand was also imposed on him under various sections. The court had convicted Malik on May 19. 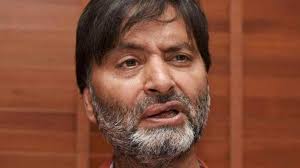 Terrorist organization Jammu Kashmir Liberation Front (JKLF) chairman Yasin Malik was produced in Patiala House Court under tight security on Wednesday. After hearing the arguments of all the parties, the court said that the court will give its decision at 3.30 pm. This time was extended several times. Finally, around 6 pm, the special judge started reading out his judgment.

On May 10, he pleaded guilty to all charges, but on Wednesday he said he had never been involved in any violent activity. The allegations of intelligence agencies are not true. The agency cannot prove any of the allegations. To this, Special Judge Praveen Singh said that time was given to speak against the allegations. Now take a stand for reducing your sentence. To this Yasin said that the court can decide whatever it wants.

During the debate, the NIA told the court that Yasin was responsible for the exodus of Kashmiri Hindus from the valley. He carried out stone pelting and terrorist incidents in the valley by raising funds with the help of Pakistani organizations. The NIA told the court that Malik's monthly income is Rs 50,000. There is also land named after him in different places of the valley. There are total 12 members in Yasin Malik's family.