Wrestling players' strike continues for the third day, letter written to the President of the Indian Olympic Association 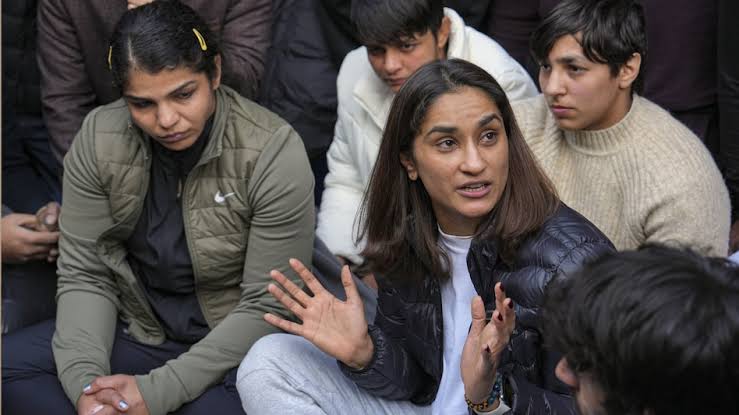 Star wrestling players of the country are protesting against the Wrestling Federation of India and its president for the third consecutive day i.e. on Friday at Jantar Mantar in the capital Delhi. These wrestlers have also lodged a serious complaint against the WFI President by writing a letter to IOA chief PT Usha. Wrestlers Vinesh Phogat, Bajrang Punia, Sakshi Malik, Ravi Dahiya and Deepak Punia have written a complaint letter to Indian Olympic Association President PT Usha against WFI President Brij Bhushan Sharan Singh. In a letter to IOA president Usha, the star wrestlers have accused the WFI president of sexual harassment and financial irregularities.

For the last three days, India's star wrestling players have been protesting, due to which the WFI is in the dock. Seeing the seriousness of the matter, a day earlier, the Sports Ministry had asked the WFI to submit a report on the entire matter within 72 hours. The report is likely to be submitted by WFI by 3 pm today. On the other hand, Union Sports Minister Anurag Thakur left his important tour from Chandigarh late night and reached Delhi and held a meeting with the wrestling players sitting on dharna for about four hours. During the meeting, Sports Minister Anurag Thakur not only heard Vinesh Phogat, Sakshi Malik, Bajrang Punia, Ravi Dahiya about their problems, but also assured to solve the problem completely. During this, he also promised to form a committee, but the players were completely dissatisfied with the assurances and promises given by the Union Sports Minister and their protest continues for the third day.

Tweeted on Twitter from a handle named Kshatriya Voice. It is written that after 2019, 2020, 2021 and 2022, Bajrang Punia has completely remembered that Brijbhushan Sharan Singh was torturing him and his Jat gang for many years. And perhaps this harassment will not stop until a Jat becomes the President of Indian Wrestling Federation. Several tweets containing photographs of Brij Bhushan Sharan Singh and wrestler Bajrang Punia together have been added to these tweets. These tweets were made by Punia. In these tweets, Bajrang has used respectful words towards Brij Bhushan Sharan Singh.