Each of the three oxygen production plants, which are the size of 40-foot freight containers, produces 500 litres of oxygen per minute, enough to supply 50 people. They are scheduled to arrive in India on Sunday morning, where they will be transferred to hospitals by the Indian Red Cross Society. 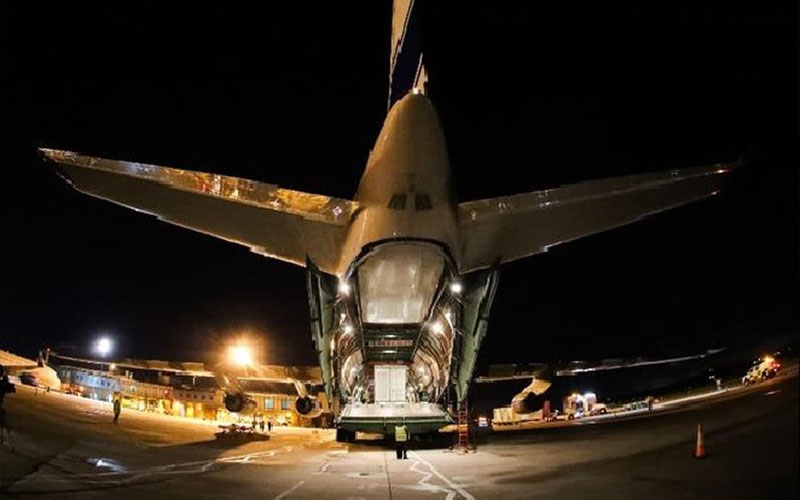 The UK has shipped three 18-tonne oxygen generation plants onboard the world's largest cargo plane to help India tackle a severe oxygen shortage caused by a devastating second wave of Coronavirus infections. Each plant is capable of producing 500 litres of oxygen a minute.

An Antonov An-124 aircraft will fly from Belfast on Friday with oxygen generation plants and 1,000 ventilators from the UK's surplus stocks. Staff at the airport worked all night to load life-saving equipment provided by the International, Commonwealth and Development Office of the United Kingdom.

Each of the three oxygen production plants, which are the size of 40-foot freight containers, generates 500 litres of oxygen per minute, enough to support 50 people. They are scheduled to arrive in India on Sunday morning, where they will be transferred to hospitals by the Indian Red Cross Society.

The new aid comes on top of the 200 ventilators and 495 oxygen concentrators that the UK sent to India earlier this month. It comes after talks with India and a promise from Prime Minister Boris Johnson that the UK will do whatever possible to assist, according to the UK foreign office.

“The UK is sending surplus oxygen generators from Northern Ireland to India,” Foreign Secretary Dominic Raab said. The country's hospitals will benefit from this life-saving equipment as they care for vulnerable Covid-19 patients.

“The United Kingdom and India are collaborating to combat the pandemic. Once we are all safe, no one is safe.”

In a separate event, the Japanese embassy announced on Friday that 100 oxygen concentrators would be sent to India on May 8 as part of Japan's first round of emergency aid in response to the Covid-19 outbreak.

On 30th April, the Japanese government declared that it will provide India with 300 oxygen concentrators and 300 ventilators. “Japan will continue to provide timely assistance to India in order to contain the Covid-19 situation,” the embassy said.

On 5th May, Japanese Foreign Minister Yoshihide Motegi told his Indian counterpart S Jaishankar that, in addition to other aid, Japan is willing to provide a grant of up to $50 million (roughly 5.5 billion yen) to India.