The $42.8 billion wind farm, which will be built on the country's southwest coast over the next decade, would generate up to 8.2 gigawatts of power, and is one of a catalogue of large projects that the government hopes to launch with private sector support in order to meet its goal of becoming carbon neutral by 2050. 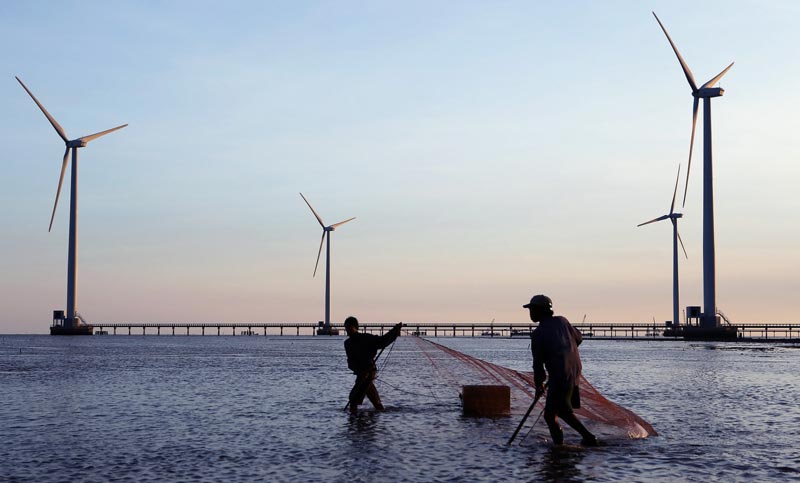 The fishing grounds where generations of fishermen have caught shrimp, butterfish, and croakers will be transformed into the world's largest offshore wind farm. “I was initially opposed to the plan because it would destroy our livelihood,” said Jung, who leads a group of local fishermen in some 200 ships that drop nets off the southwestern tip of the Korean peninsula. “However, I realised that the project is part of the country's transition to cleaner energy, which is something we must accept rather than fight against it.”

With a climate and topography ill-suitable for large-scale wind power generation on land, the country is looking to the sea to reach its clean energy goals. The offshore substation collects and transmits energy generated by 20 wind turbines in the Southwest Sea.

South Korea on track to achieve carbon neutrality by 2050 and end coal financing after the ruling Democratic Party won an absolute majority in the country's parliamentary elections on Wednesday. President Moon Jae-in’s party won a landslide of 180 seats in the 300-member National Assembly, up from 120 previously, in a huge show of faith in his handling of the coronavirus pandemic.

The election was one of the first nationwide polls held since the outbreak began, however, the threat of Covid-19 certainly doesn't stop voters, who turned out in record numbers.

The $42.8 billion wind farm, which will be built on the country's southwest coast over the next decade, would generate up to 8.2 gigawatts of power. It is one of a catalogue of large projects that the government hopes to launch with private sector support in order to meet its goal of becoming carbon neutral by 2050.

It’s a momentous challenge. South Korea's industrial upsurge since the 1960s has elevated it to one of the world's top ten energy consumers, with per capita electricity consumption surpassing both Japan and Germany. And fossil fuels account for two-thirds of that. In 2019, renewable energy accounted for only 6.5% of South Korea's generation, with nuclear accounting for the remainder.

Many countries are upscaling wind energy. According to the clean energy research group BloombergNEF, developers set a record last year by installing 96.3 gigawatts of wind turbines worldwide. That would be enough to power approximately 36 million American households. To meet the Paris Agreement's goals, the International Energy Agency estimates that at least 160 gigawatts of wind power should be added per year by 2025.

Last year, after regaining power on the promise of a "Green New Deal", President Moon Jae-Democratic's Party has implanted new urgency into the transition, proposing to procure more than 20% of its energy from renewable sources by 2030. South Korea is concerned with more than just reducing emissions. Apart from a small amount of gas and coal, all of its fossil fuels are imported, costing the country $73 billion a year.

With its conventional hydro-power resources nearly depleted and a climate and topography unviable for large solar and onshore wind plants, the country is looking to the sea to solve the problem. Sihwa Lake already has the world's largest tidal power plant. However, the government believes that one of its best chances is to harness 12 GW from offshore wind by 2030, up from less than 0.2 GW now.

Northern European countries such as the United Kingdom, Denmark, and Germany have dominated the offshore wind industry so far, thanks to generous government subsidies and the unusually shallow waters of the North Sea. However, this is beginning to change. China installed a record number of offshore wind turbines last year, overtaking the United States as the world leader in total capacity. The administration of US President Joe Biden intends to rapidly expand wind farms off the east coast.

On March 25, maintenance workers approached an offshore wind turbine in the Southwest Sea.

Local opposition is one of the most significant obstacles to achieving these objectives. According to a BloombergNEF report from September, South Korea could fall 4.6 GW short of the government's target wind power, due to “severe opposition” from local residents.

To reduce tensions with the community, the Shinan government passed rules in 2018, allowing them to acquire a 30% stake in local renewable energy projects. When last year's profits from two solar plants are distributed this month, residents of six of the archipelago will receive a windfall.

There are additional obstacles. According to IHS Markit, the cost of wind power in South Korea is currently around $220 per megawatt-hour, which is among the highest in the world.

“You'd need the wind to blow at 13 metres per second all day every day to run at full capacity of 8.2 gigawatts, which is unattainable,” said Joo Han Gyu, a nuclear engineering professor at Seoul National University. “The economics of these wind turbines are irrational, and the increased costs will eventually fall on individuals.” South Korea's wind ambitions are also dependent on a concerted effort from dozens of private companies.

A “one-stop-shop” bill will be proposed in the first half of this year, allowing the government to take the lead in exploring potential offshore sites and obtaining necessary permits, as per Yoon Sunghyuk, director of the renewable energy division at the Ministry of Trade, Industry, and Energy.

“No one knows the sea here as we do. I'm confident there will be plenty of work for us to do,” Jung said. “If you can't turn the tide, it's better to go with it.”