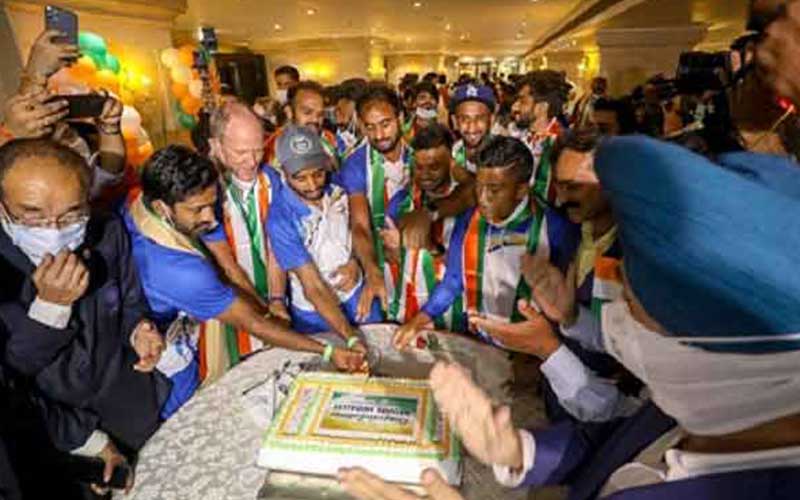 New Delhi: Tokyo Olympic Games 2020 coming to its exciting culmination with the national men’s team of India moved to third place and the Indian Women team moves to eighth position from 10th position in the  FIH World Rankings.

Belgium and the women’s team of Netherlands taking the gold medals, there has been jostling for positions in the FIH World Rankings. For Belgium men, winning the Olympic medal in a scintillating match against their close rivals Australia brought another prize - a jump in rankings to number one in the world. The victory moved Belgium onto 2716 points, ahead of Australia who are on 2642 points.

India men enjoyed a fantastic competition, beating Germany in exciting fashion in the bronze medal match. This was India men’s first medal since they last won gold in 1980. The 41-year wait ended with a bronze medal and wins over Argentina, Japan, Great Britain and Germany in the pool and knock-out stages, sees the India (2362) move to third in the world rankings, ahead of the Netherlands (2115) in fourth and Germany (2072) in fifth.
Great Britain, whose world rankings are categorised as England (1990), remain in sixth position, after they lost to India in the quarter finals, while Argentina (1826) also retains their position at seventh.
New Zealand (1598), Spain (1532) and Canada (1422) are also unmoved following their performances at the Olympic Games Tokyo 2020, but South Africa’s (1413) performance, which included a surprise win over the higher-ranked German team has moved the African team from 14th to 12th in the FIH World Rankings.
Host nation Japan (1025) drop one place from 15th to 16th, meaning they change places with Asian rivals Korea (1065).

There is, once again, no change at the very top of the women’s FIH World Rankings where Olympic champions the Netherlands remain resolutely in the number one position. Argentina’s loss in the Olympic final, combined with Great Britain’s bronze medal win, sees England (2275), who represents Great Britain in the world rankings, leapfrogging Argentina (2261), Australia (2234) and Germany (2165) to move to second in the world rankings. The quarter-final losses suffered by Australia [to India] and Germany [to Argentina] caused both teams to slip two places down the rankings.
Spain’s (1859) strong Olympic performance sees the Red Sticks move from eighth to sixth, New Zealand (1721) have travelled in the opposite direction as they fall from fifth to seventh. India’s (1710) performance moves them up to eighth position from 10th, with Belgium (1700) remaining in ninth and China (1651) slipping to 10th.
Ireland’s (1499) failure to make the quarter-finals in Tokyo sees the Irish team slip to 12th. It is no move for host nation Japan (1231) or South Africa (1040) who remain unmoved in 14th and 16th position respectively.