Women making her-story at the Grammys

Women bagged all the major awards of the evening with Beyonce making special history by having most wins for a singer at 28 after winning the Best R&B Performance for ‘Black Parade’. 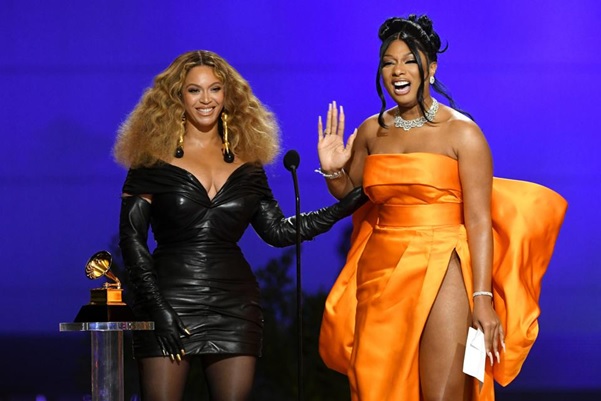 The 63rd Recording Academy awards popularly called the Grammys were celebrated on Monday at the Staples center, California grabbing eyeballs from all around the world, with the show being touted as one of the most successful ones in recent years. Artists such as Harry Styles, H.E.R, Billie Eilish, The Strokes, Lady Gaga amongst many other emerged winners in the end.

The awards started a bit shaky, with the social distancing protocols there was bound to be confusion with the awards. At one point The Strokes did not even realize they had won the best Rock album, only grasping after a few minutes of delay celebrating excitedly. “Tonight, is going to be the biggest outdoor event this year besides the storming of the Capitol,” the night’s host, Trevor Noah, announced at the start of the show.

The show gathered itself by giving strong message with emphasis on the Black Lives Matter protests and finally recognizing the role of women in music. The show, which is usually flocked by fans and glitzy glamour, was more intimate with the focus entirely on the performances. The unique show gave an opportunity for fans to witness something like Harry Styles opening the night with ‘Watermelon Sugar’ while the Haim waiting in the audience with their instruments for their turn.

Artists performed sets on four indoor stages, both live and prerecorded while the Grammys were presented outside. Megan Thee Stallion was a real star taking home the Best New Artist award along with Best Rap Song and performing splendidly to ‘Savage’, ‘Body’ and then turning it up a notch with Cardi B joining her on stage.

Dua Lipa’s ‘Future Nostalgia’ took home the Best Pop Vocal Album while electrifying the stage with DaBaby assisted ‘Levitating’ remix. BTS performed their coveted ‘Dynamite’ all the way from Seoul while Taylor Swift performed in the enchanted forest backdrop performing songs from ‘Folklore’ for which she picked up the Album of the Year, becoming the first female artist to win it three times.

Women bagged all the major awards of the evening with Beyonce making special history by having most wins for a singer at 28 after winning the Best R&B Performance for ‘Black Parade’. In her acceptance speech she said, “As an artist, I believe it is my job and all of our jobs to reflect the times and it has been such a difficult time.” While H.E.R accepted the Song of the Year for ‘I Can’t Breathe’ which echoed the death of George Floyd and the Black Lives Matter struggle. Lil Baby, Tamika Mallory and Killer Mike produced a passionate performance of ‘The Bigger Picture’ opening with a scene of a black man being shot by police, bringing to the people social issues through the celebration of music.