Woman arrested after shooting the Olympic flame with a water gun: Japan 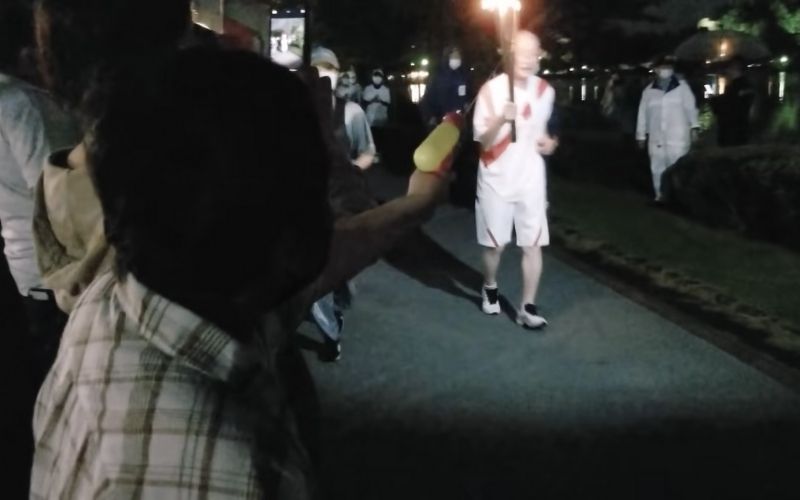 53-year-old Kayoko Takahashi was seen in a viral video holding the plastic water gun as the Olympic torch was carried through the city of Mito.

A lady was arrested by Japanese police after she allegedly attempted to detonate the official Olympic torch using a water gun. Kayoko Takahashi, a female protestor who was standing among the throng and abruptly came in the front to carry out her objective of extinguishing the Olympic flame. In the footage of the incident, which went viral on social media, the 53-year-old is seen approaching the Olympic runner but is apprehended.

She can be heard shouting in the viral video "No Olympics," "End the Olympics," and " Stop the games." The flame, though, did not go out, and the runner proceeded on the path. Security officers escorting the torch swiftly intervened with a shield to divert the water stream, while another officer apprehended and detained the female protestor.

Following her detention, authorities stated that she was protesting the current 2021 Olympic Games in Tokyo, which are taking place amid the threat of a catastrophic coronavirus outbreak.

According to Noriaki Nagatsuka, a deputy police chief in Mito, the 53-year-old was arrested for "deliberately aiming at the runner and interfering with the relay."

Many Japanese people are opposed to the ongoing Olympic events. So far, just 14% of the population has received both COVID vaccines. Moreover, the escalating number of illnesses and a low number of vaccinated persons has heightened locals' worry. Given the country's poor immunisation rate, the Japanese fear it is not prepared to host a huge international event securely.

After a year's delay, the Tokyo Summer Games will begin on 23rd July. In the meantime, event organisers have stated that they will impose health precautions such as social separation between athletes and contact tracing in the Olympic Village to minimise viral spread.

Furthermore, Tokyo, the Olympic host city, is experiencing the start of another outbreak, with hundreds of new virus cases being reported every day. The Tokyo government recorded 896 new coronavirus cases in the previous 24 hours on Thursday.