When science meets art and noosphere

This art show calls attention to perspectives on the unprecedented rate of human development of our times, our rapidly evolving relationship with the world around us 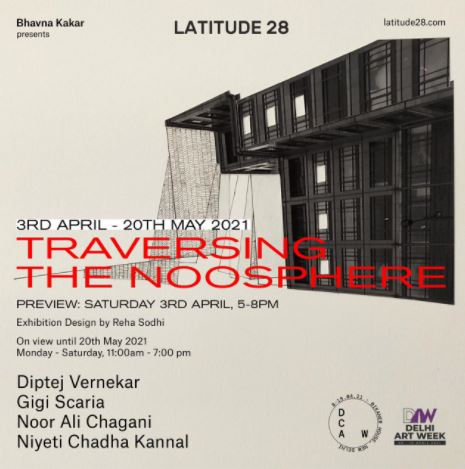 Latitude 28, is a well-known art gallery in New Delhi’s Lado Sarai, known for mounting unique shows and a justified mix of senior and new artists who do experimental works.

What I find unique in this gallery is, that it cares not, to pick the old and known but brings forth shows that we would barely see unless we are passionate neo-art hunters. Like its unusual name for an art gallery, Latitude 28 founded and run by Bhavna Kakar is one art hub in South Delhi to experience original and experimental shows.

Among its multiple series throughout the year, this time, it brings ‘Traversing the Noosphere’, brings together the art works by four artists namely, Niyeti Chadha Kannal, Gigi Scaria, Diptej Varneker, and Noor Ali Chagani.

The exhibition designed by curator Reha Sodhi elaborates on the philosophical thought by Vladimir Vernadsky (1863-1945), a Russian, mineralogist and geochemist. He was considered one of the founders of geochemistry, biogeochemistry and radiogeology. He is also known as the founder of the Ukrainian Academy of Sciences, as records puts it.

The show takes a cue from the scientist’s famous book “The Biosphere and The Noosphere Vernadsky” where reports on the Noosphere as a new evolutionary stage in the development of the Biosphere, when the human-and-nature interaction would be consciously balanced.

Notably, Vernadsky had defined the noosphere as the new state of the biosphere. He further described it as the planetary "sphere of reason”. The noosphere represents the highest stage of biospheric development, its defining factor being the development of humankind's rational activities, as documented reports put it. The show combines this state, science and art to bring out a complex relationship of humans to the three.

So, in his projection of the future, Vernadsky considered the emergence of the Noosphere as a critical evolutionary step needed for preserving and reconstructing the Biosphere, in the interest of humanity as a single entity. In present times of environmental crisis and deep-rooted uncertainty about the future, Vernadsky’s optimistic premise of the Noosphere may seem like a stark contrast to the zeitgeist of the contemporary period. We live at a very special time in the history of humanity – a time of developing ecological crisis where our survival as the human race is threatened by the progression of climate change and depletion of natural resources.

The Noosphere envelops the world as a sphere of thought that has emerged as a consequence of the increasing complexity of human consciousness, a natural culmination of biological phenomenon. The existence of the sphere is indisputable, yet its nature and consequence for humanity is an exploratory angle of Traversing the Noosphere.

This show calls attention to perspectives on the unprecedented rate of human development of our times, our rapidly evolving relationship with the world around us and our changing sense of self in relation to the natural world.

If you find it complex, it’s to do with one’s learning of new art practices in these complex times.

The exhibition that begins on April 3rd of from 5 pm onwards, remains on view till May 20.