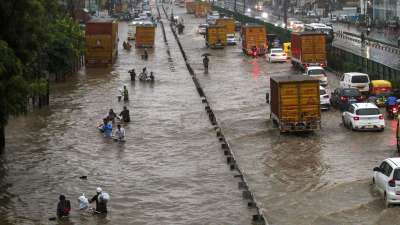 The rain in Delhi-NCR since yesterday continues even today. According to the forecast of the Meteorological Department, there is a possibility of heavy rain in Delhi-NCR even today. Schools in Noida-Greater Noida, Ghaziabad have been given a holiday. All government and private schools up to class VIII in Ghaziabad, Noida and Greater Noida will remain closed on Friday due to rain. At the same time, corporate and private offices in Gurugram have been advised to do work from home. In many districts of UP, orders have been given to close schools up to class VIII today. One day holiday has been given in some districts and two days in many districts.

Due to rain throughout the day in Delhi-NCR, water was flooded at many places. People had to face a lot of problems due to water logging. Long jams were seen in Gurugram and Noida. The fares of cabs and autorickshaws also shot up due to the rains. The Delhi Municipal Corporation received complaints of waterlogging in Fatehpur Beri, Sangam Vihar and Tikri villages due to rain while seven complaints were received of uprooting of trees.