Partha Chatterjee has nothing to do with the case. There is no truth in the allegations of CBI. Her lawyer said that on July 22, when the ED raided Parth's house, nothing was recovered from there. 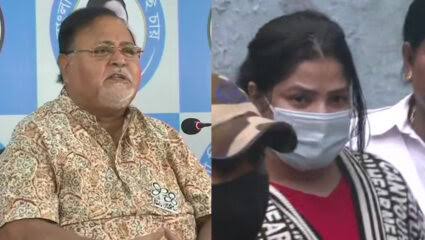 A Bankshall court on Friday sent former Bengal minister Partha Chatterjee and his close aide Arpita Mukherjee to 14-day judicial custody in the Bengal teacher scam case. He will now be produced in the court on August 18. Earlier, Parth and his close aide Arpita had reached the City Sessions Court in Kolkata in the SSC recruitment scam case. After this, the hearing came to an end after the arguments from both the sides were completed. The court had reserved the order.

During the hearing, Parth's lawyer said that till now no one has come forward who has said that Partha Chatterjee has demanded a bribe. Be it CBI or ED, no such allegations have been leveled in front of anyone. Can agencies produce any such witness? Partha Chatterjee has nothing to do with the case. There is no truth in the allegations of CBI. Her lawyer said that on July 22, when the ED raided Parth's house, nothing was recovered from there.

Arpita Mukherjee's lawyer told the court that her life was in danger. We want a Division 1 prisoner category for that. Her food and water should be tested first and then given to them. ED's counsel also supported that their security is at risk as not more than 4 prisoners can be kept. Partha Chatterjee's weight reduced by three kilos. Earlier this afternoon, Partha Chatterjee and Arpita Mukherjee were taken to the ESI Hospital in Joka for medical examination. Both were medically examined here before being taken to the court. According to information received from hospital sources, Partha Chatterjee's weight has reduced by three kg during ED custody. Earlier they were 111 kg, now they are 108 kg. Along with this, it was told that during the investigation, she did not take any tea and biscuits today.