Watch 'ring of fire' before sunset in parts of India, this Thursday: Solar Eclipse 2021

The first solar eclipse of the year will take place tomorrow, June 10th. Reportedly, the solar eclipse will be visible in Ladakh and Arunachal Pradesh, a few minutes before the sunset. 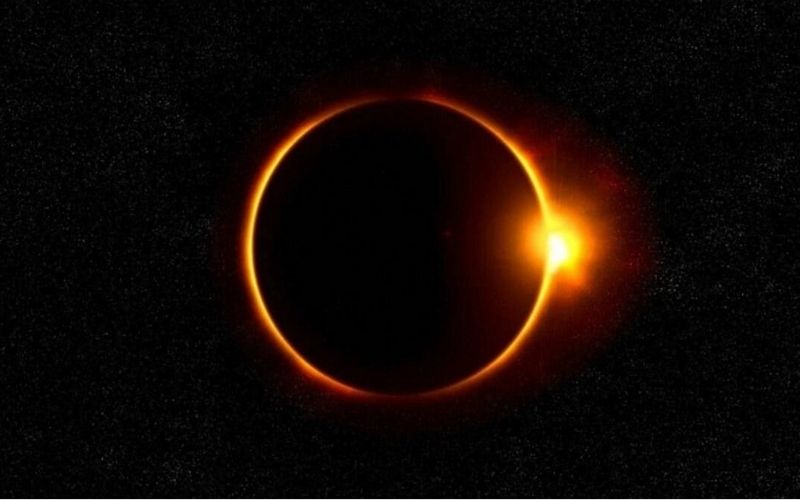 When the Sun, Moon, and Earth all align in a straight line, almost on the same plane, these astronomical phenomena occur. The Moon, however, does not completely hide the Sun due to its elliptical orbit, leaving the Sun's visible edges to make a "ring of fire."

According to Debiprasad Duari, Director of M P Birla Planetarium, the eclipse path would only be seen in the north-eastern limits of the country, in Arunachal Pradesh and Ladakh.

People in Arunachal Pradesh will witness the eclipse just before dusk, as per Duari.

The Moon will cover a microscopic portion of the Sun, which is also very low on the horizon, and the sighting will last at most 3-4 minutes depending on the position, Duari explained.

Further, the eclipse will be visible in Ladakh for a limited time but at a higher altitude than elsewhere.

"On the northern boundaries, in Ladakh, a sliver of land in the border region can experience the final phase of the partial eclipse, again for a brief period, but at a greater altitude than the eastern portion of the country," he added.

According to the official, The solar eclipse was visible from the neighbourhood of Dibang Wildlife Sanctuary in Arunachal Pradesh at nearly 5:52 p.m. The last aspects of the phenomena can be seen around 6 p.m. in the northern region of Ladakh, where the sun sets at around 6.15 p.m.

He stated that the partial eclipse will end at 6:41 p.m. IST.

Various organisations around the world are providing live coverage of the eclipse.

The coming solar eclipse, called 'ring eclipse,' is attracting a lot of attention as people wait to see the Sun emerge in an extremely bright ring around the dark disc of the Moon.

The Moon and the Sun must also be in direct line with the Earth for a total solar eclipse to occur. Nevertheless, because those who experience the total eclipse are in the centre of the Moon's shadow when it hits Earth, it is only viewable from a small area.

The distance between the Moon and the Earth distinguishes an annular eclipse from a total eclipse. It happens when the Moon is at its farthest distance from Earth, making it appear smaller than usual and not blocking the complete view of the Sun.