The president said that before diplomatic talks with the Russian Federation were possible, the Russian military would have to withdraw from Ukraine and stop treating Russia as a terrorist. 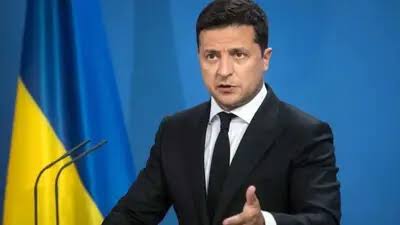 The war between Ukraine and Russia continues. Meanwhile, there is a big news that Ukrainian President Volodymyr Zelensky's car has got into an accident. He got injured in the accident. However, there is no report of any serious injury. This information was given by Zelensky's spokesman. Serhi Nykiforov, spokesman for Ukrainian President Zelensky, said on social media on Thursday that a car collided with the president's car and motorcycle. Meanwhile, according to a leading Ukrainian news portal, the doctor examined Zelensky after the accident. After investigation, he was told that he was not seriously injured. Doctors also gave medical help to the driver along with Zelensky and transferred them to an ambulance.

Significantly, in the midst of the war in Ukraine, Zelensky has repeatedly attacked Russia. They have said that no matter how Russia attacks, they will not bow down. However, the option of negotiation is always open. In a recent panel discussion during the Yalta European Strategy Annual Meeting, Ukrainian President Vladimir Zelensky insisted that it was impossible to negotiate an end to the war with Russia. Because he has failed to state his position. He said that 'we want to end the war, but our circumstances and capabilities have changed. Our people do not want to negotiate with terrorists. However, if he wants, one can communicate with him, because at least he will know what he wants.

Zelensky emphasized that there is no confidence that the Russian side will fulfill any of the promises it made. He said 'I think they won't. No one believes they will. You don't want to deal with them. The president said that before diplomatic talks with the Russian Federation were possible, the Russian military would have to withdraw from Ukraine and stop treating Russia as a terrorist.