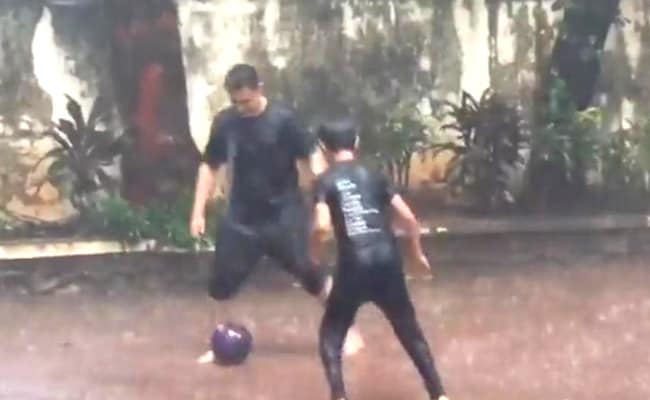 Aamir Khan often remains in the headlines for one reason or the other. A new video of Bollywood's Mr. Perfectionist Aamir Khan with his son Azad is making big headlines. In this video, Aamir Khan can be seen enjoying a fun match with his son. In this video, Aamir and his son Azad can be seen enjoying the first rain of the season amid Mumbai's monsoon. In the video, he is playing a fun game of football.

All fun and a lot of rains!

Aamir & Azad enjoy the rains over a football session. pic.twitter.com/0aWXY35vhF

In the video going viral on social media, this father-son duo is seen completely immersed in the game. One interesting thing to be seen in this is that Azad is seen doing tricks to score goals when Aamir's attention is diverted. Significantly, Aamir Khan is very close to his children. Aamir is often seen encouraging him toward sports, as it plays an important role in everyone's fitness and personal growth.

Aamir, who is a sports watcher and supporter, is popularly known for showing his keen interest in every sport. From table tennis to wrestling and cricket, Aamir is inclined toward every sport. Actors not only take an interest in sports but also involve their children in it. On the work front, he will soon be seen in the lead role in Laal Singh Chaddha alongside Kareena Kapoor Khan and Mona Singh.