Violence In UP: 304 Arrested For Violence During Namaz In UP

Atala and Nurullah Road are in panic due to this action of the police administration. The PDA had already pasted the demolition notice at the house of the accused of violence, Javed. 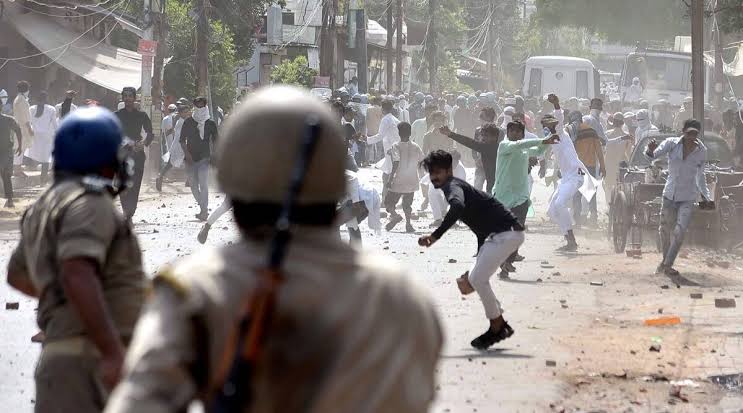 In the violence that broke out in Prayagraj, Hathras, Firozabad, Saharanpur after Friday prayers in Uttar Pradesh, 304 accused have been arrested by the police till 8 am today. The situation is normal in the violence-affected areas in the violence and stone-pelting districts today after Chief Minister Yogi Adityanath's instructions to take strict action against those who tried to throw the state into the fire of riots. Security arrangements are tight in all the violence-prone areas of these districts.

ADG Law and Order Prashant Kumar said that so far 13 FIRs have been registered in the case of violence. At the same time, in the presence of a large number of police forces at the house of Javed, accused of violence in Prayagraj, the PDA took the action of bulldozer. Under which the illegal part of his house was demolished.

On Friday, CM Yogi Adityanath has directed to take strict action on the ruckus in Prayagraj, Hathras, Moradabad, Firozabad and Ambedkar Nagar in the state. Since then, 304 people have been arrested so far. 91 from Prayagraj, 51 from Hathras, 71 from Saharanpur, 34 from Moradabad, 15 from Firozabad, six from Aligarh, 34 from Ambedkarnagar and two from Jalaun.

ADG Law and Order Prashant Kumar said that a total of 304 accused have been arrested so far after protests in many cities of the state after Friday prayers on the controversial remarks of suspended Bharatiya Janata Party spokesperson Nupur Sharma. CCTV is being scanned to nab other accused.

In Prayagraj along with other districts, the police had intensified the arrest since Friday, today the action has been intensified. After the instructions of CM Yogi Adityanath, the activism of the administration increased and the police have made many arrests from place to place. Taking strict action, Uttar Pradesh Police has arrested a large number of people from different districts of the state.