The Assam Petroleum Mazdoor Union (APMU) sent separate letters to all PSU oil marketing companies including IOC, HPCL, and BPCL informing them about the union's decision not to refuel tankers. 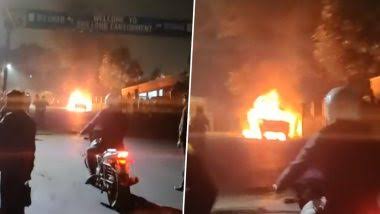 A candle march was taken out in the capital Shillong on Thursday evening over violence along the Meghalaya border with Assam, after which a police bus and a jeep were torched and police were pelted with stones and petrol bombs. A senior police officer gave this information.

Superintendent of Police (City) Vivek Saim said that seven people, including four policemen, were injured in the violent clash between the protesters and the police. Petrol bombs were hurled at a police bus and jeep, setting them on fire, while a traffic police cell was razed. Apart from this, stones and petrol bombs were thrown at the police at Barik Chowk. A few meters away, a candle march was organized by various organizations including the Khasi Students Union, and the Federation of Khasi Jaintia and Garo People to protest against the violence.

Police said they had to fire tear gas shells to bring the situation under control. Police said those responsible for the violence are yet to be identified. Six people, including a forest guard, were killed in violence at a disputed site in West Karbi Anglong district along the Assam-Meghalaya border in the early hours of Tuesday. The clash broke out when a truck loaded with illegally cut timber was stopped by Assam forest officials. The Assam government has stopped vehicles from plying to Meghalaya following a series of attacks on passenger cars following the incident.

Police personnel have put up barricades at various entry points from Assam to Meghalaya and people are being urged not to travel to Meghalaya in vehicles with Assam number plates. Meanwhile, the apex body of petroleum employees in Assam said on Thursday that it has stopped transportation of fuel to Meghalaya following reports of attacks on vehicles going from Assam. The Assam Petroleum Mazdoor Union (APMU) sent separate letters to all PSU oil marketing companies including IOC, HPCL, and BPCL informing them about the union's decision not to refuel tankers.