KK Singh ADM of Patna brutally assaulted a protester during an ongoing protest at DakBangla Chauraha by the aspirants of CTET / BTET. 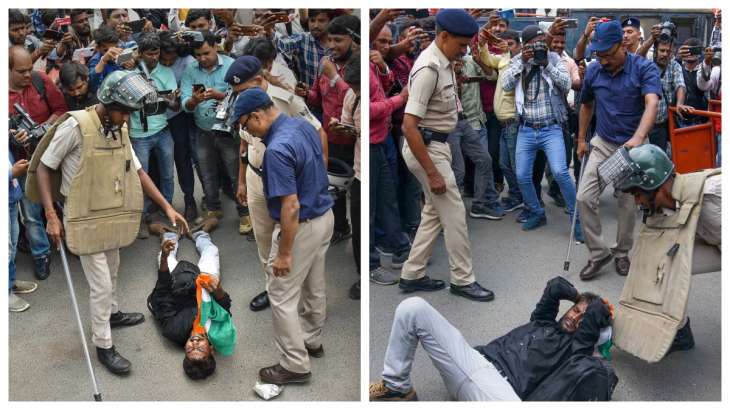 In Bihar's capital Patna, teacher candidates demonstrated in hundreds on Monday against the delay in recruitment. During this, the police lathi-charged them, a video of which is going viral. In it, Patna Additional District Magistrate (ADM) KK Singh can be seen brutally thrashing a protester with a stick while he lies on the ground holding the national flag.

The job aspirants were protesting against the Bihar Government at Dak Bungalow Chowraha in Patna where a CTET-BTET candidate is being brutally beaten up by Patna ADM KK Singh.

Police also used water cannons to disperse the protesters. After the video surfaced, the District Magistrate of Patna ordered an inquiry committee. The official has also expressed displeasure over the incident. Deputy Chief Minister Tejashwi Yadav has also talked about an investigation regarding the lathi charge on the teacher candidate.

Deputy CM's office was told, "Hon'ble Deputy Chief Minister spoke to Patna District Magistrate over the phone. DM has formed an inquiry committee under the leadership of Patna Central SP and DDC that why ADM himself lathi-charged the candidates, what is this? If found guilty, action will be taken against the concerned officer."

It is clearly visible in the video that ADM KK Singh, posted in Patna, brutally lathi-charged the protesting candidate with a stick despite having the tricolor in his hand. Directly targeting the tricolor, KK Singh kept attacking the candidate's hand, hitting the tricolor with sticks dozens of times in a row. The humiliation of the tricolor was also being seen by the police and other people of the administration standing there.