All were taken aback when they saw a PPE-clad ambulance driver dancing in the baraat party, some even moved away from him while he let himself loose 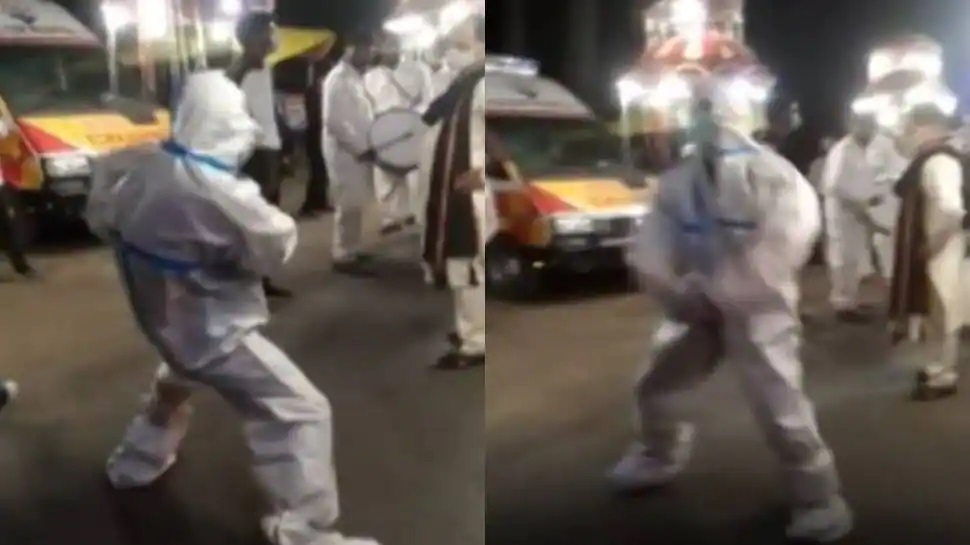 In the midst of the devastation caused by the brutal second wave of Covid-19 infections in India, a viral video of an ambulance driver from Uttarakhand clad in PPE kit dancing in a stranger's 'baraat' is spreading smiles among netizens.

As per local reports, the ambulance driver who was identified as, Mahesha local from Nainital district, was in a state of mental anguish having been transporting Covid-19 positive patients in and out of hospitals for the entirety of the day.

On Monday night, the baraat procession was passing in front of the Sushila Tiwari Medical College which was where Mahesh working. He could not stop himself from going in the fun, he emerged from his ambulance to join the wedding procession and started dancing to the tunes of the band.

All were taken aback when they saw a PPE-clad ambulance driver dancing in the baraat party, some even moved away from him while he let himself loose.

Mahesh said, “I am constantly working to ferry Covid-19 patients to the hospital, and I didn’t go home due to which I am under a lot of stress. I couldn’t stop myself after seeing the baraat in front of the hospital.”

After the wedding guests saw that Mahesh was a health worker enjoying himself, they joined in dancing along while being masked. They filmed him in a 40 second video clip which has now made Mahesh viral on the internet, who is seen dancing to dhol beats with the hospital ambulances in the backdrop.

Some positivity from Haldwani, Uttarakhand.
Ambulance driver mahesh started dancing in a baraat as it crossed Sushila Tiwari Hospital. He said he carries COVID patients all day which leaves him in lot of stress. He was trying to dance as a stress buster. #spreadsomepositivitypic.twitter.com/DTYTuMDwYL

“I danced for nearly 10 minutes and forgot everything. It was a relief,” he further added, “After dancing, my mind felt a little better and I forgot my stress. And that is why I danced.”

As the second wave of Covid-19 unleashes devastation on the nation, health care workers and hospitals have come under tremendous strain, dealing with a lack of beds, oxygen, and ventilators.