“While the western world follows us, doing yoga … covering their body properly. We (Indians) run towards nudity,” remarked the chief minister while shaming a woman for wearing ‘ripped jeans’ 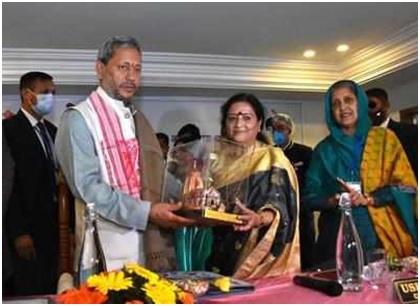 Tirath Singh Rawat the honorable Chief Minister of Uttarakhand who recently replaced the Trivendra Singh Rawat from his post and made quite the splash while inaugurating a two-day national level seminar organized by the State Commission for Protection of Child Rights (SCPCR) on the issue of increasing substance abuse among children.

The Chief Minister was shocked to notice a woman running an NGO wearing ‘ripped jeans’. He went on to conclude that wearing ripped jeans leads to collapse of society and sets a ‘bad example’ for children.

“If this kind of woman goes out in the society to meet people and solve their problems, what kind of message are we giving out to the society, to our kids? It all starts at home. What we do, our kids follow,” he added. “A child who is taught the right culture at home, no matter how modern he becomes, will never fail in life.”

He expressed his disgust for Indians adopting Western values and clothing , he remarked, “While the western world follows us, doing yoga … covering their body properly,” he added, “And we (Indians) run towards nudity.”

The BJP party member did not shy away in making his revulsion for the lady’s attire known, he went ahead and commented further,“Kaynchi se sanskaar (culture by scissors) - showing bare knees, wearing ripped denim and looking like rich kids - these are the values being given now. Where is this coming from, if not at home? What is the fault of teachers or schools? Where am I taking my son, showing his knees and in tattered jeans? Girls are no less, showing their knees. Is this good?"

His cabinet minister, Ganesh Joshi present at the event supported his comments and went ahead to limit women’s role to that of a mother, he said, "Women talk about all things they want to do in life, but the most important thing for them is to look after their family and children."

Congress Minister Sanjay Jha was quick to retaliate on the incident, he tweeted, “A society getting ripped on divisive politics is fine. But ‘ripped jeans’ destroys our great culture. Kya baat hai!”