The Alambagh police somehow pacified the shopkeepers. The loss of lakhs is being reported due to the fire. However, how the fire started could not be confirmed. 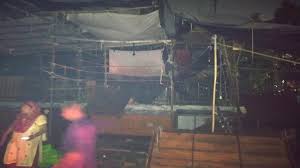 A sudden fire broke out in the shops on the side of the footpath near Chandranagar Gate in Alambagh late on Saturday night. Seeing the flames, the local people informed the police and fire department. The fire engulfed several shops before the fire tenders could reach there. The goods kept in the shops were destroyed by the fire. At around 1.30 pm, two fire tenders brought the fire under control after a lot of effort. Street shopkeepers allege that nearby traders have set fire to shops.

Angered by the incident, the street shopkeepers created a ruckus. The Alambagh police somehow pacified the shopkeepers. The loss of lakhs is being reported due to the fire. However, how the fire started could not be confirmed. According to ADCP Central Rajesh Kumar Srivastava, the fire has been brought under control. How the fire started will be investigated. Action will be taken on the basis of evidence after thorough investigation of the allegations of the track shopkeepers.