A shocking news has emerged from Uttar Pradesh's Balrampur district. The video of the body being thrown from the Rapti river bridge into the river has gone viral on social media. The viral video is being told of 29 May. Police have arrested two people after an investigation. 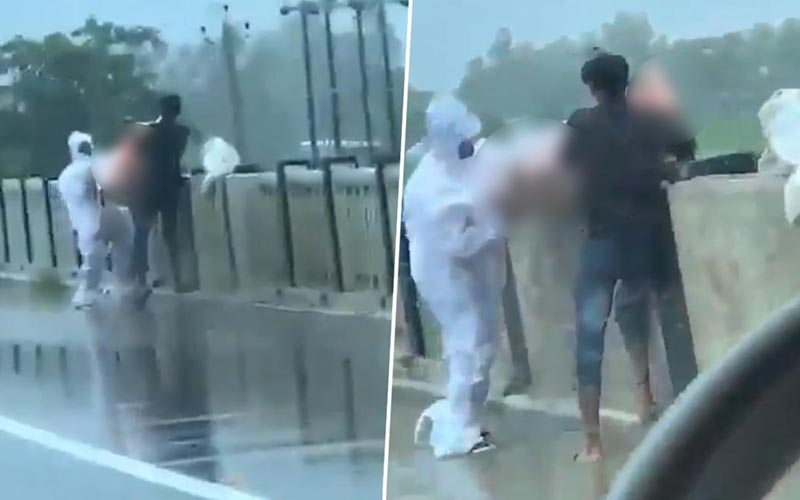 A video has surfaced in Balrampur in Uttar Pradesh, shaming humanity. In the viral video, two youths are seen throwing a body into the river from the bridge of Rapti river. A young man throwing a corpse is wearing a PPE kit. This incident is being told of the bridge built on Sisai Ghat. On Sunday, the police arrested both of them for throwing the dead body.

Chandra Prakash said, 'Some people came and told me to take them to the bridge. I stood alone at the other end of the bridge. Then a young man opened a chain of bags and threw stones and called me. Then threw the corpse in the river and went back. I had also told him that there are woods, so he said that I want to do dead body flow with water. Many people were with him, so he didn't notice my words.

In the context of the viral video, CMO Dr Vijay Bahadur Singh told that the deceased to whom the people have made water flow is from Shoratgarh police station area of Siddharthnagar district. The name of the deceased is Premnath Mishra. The CMO said that on 25 May, he was admitted to the joint district hospital's LTU ward when he got corona infected. On 28 May, Premnath Mishra died while undergoing treatment. Under the Covid-19 protocol, his body was handed over to his relatives at the funeral site.

According to viral video, prima facie it has come to the fore that the dead body has been dropped down into the river by their relatives. A case has been registered in this case. Further action is being taken.

On this issue, the Balrampur Police Media Cell said that it was told by the Chief Medical Officer of the district that Premnath Mishra died on May 28 while undergoing treatment at Balrampur Covid-19 L-2 Hospital. On May 29, around 12:30 pm, the dead body was handed over to the deceased's nephew Sanjay by bringing him to Sisai Ghat.

But now after the video went viral, the accused Sanjay and Manoj Kumar have been arrested by registering a case under the Pandemic Act on the basis of written Tahrir of Ambulance driver Rampreet Bharti.