UP government minister Rakesh Sachan absconded after being found guilty in Arms Act, clarified on the allegations

Prosecution Officer (PO) Richa Gupta said that when the court asked the defense counsel to argue on the quantum of punishment, Sachan left the courtroom immediately after his conviction. 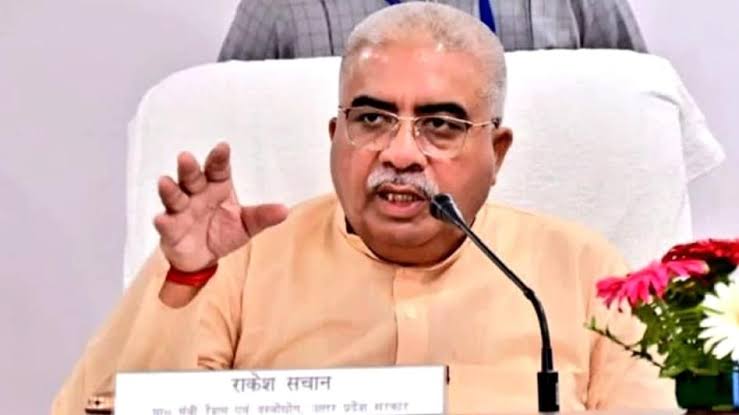 The statement of Minister Rakesh Sachan in the Yogi government has come amid allegations of running away from the court in Kanpur. He said on Sunday that today you can talk as much as you want, but you will check the CCTV footage installed in the court room and the premises, will you not? If I ran, everything would have been recorded, wouldn't it? nothing of the sort. Let us tell you that a court in Kanpur on Saturday convicted Uttar Pradesh Minister Rakesh Sachan in a three-decade-old Arms Act case, after which the minister was accused of disappearing from the courtroom without giving bail. However, the minister denied the allegation of missing, claiming that his case was not listed for final decision.

Prosecution Officer (PO) Richa Gupta said that when the court asked the defense counsel to argue on the quantum of punishment, Sachan left the courtroom immediately after his conviction.

Gupta said that Sachan left without a bail bond and an FIR would be registered against him in this regard. Speaking to PTI over phone, Police Commissioner BP Jogdand confirmed that he had received a written complaint against Sachan. However, he did not elaborate on the contents of the complaint and said that he had not seen it personally.

A senior official said on condition of anonymity that Sachan fled from the court's conviction order, which was given to him for his signature.

The official said the decision to register the FIR against the minister was taken after a marathon meeting with senior judicial officers, conceding that leaving him without action could put the presiding officer in trouble. Giving information about the case, Gupta said that in 1991, the police had recovered an illegal firearm from Rakesh Sachan. Sachan had left the Congress and joined the BJP earlier this year, just before the assembly elections. He entered politics in the early 90s by joining the Samajwadi Party. In 1993 and 2002, he was elected MLA from the Ghatampur assembly seat before winning the parliamentary elections in 2009 from the Fatehpur Lok Sabha seat.