UP: Congressmen demonstrated by driving tongas and bullock carts against the rising prices of petrol and diesel

Congress workers demonstrated in the districts under the leadership of district presidents against the central government demanded a reduction in prices. 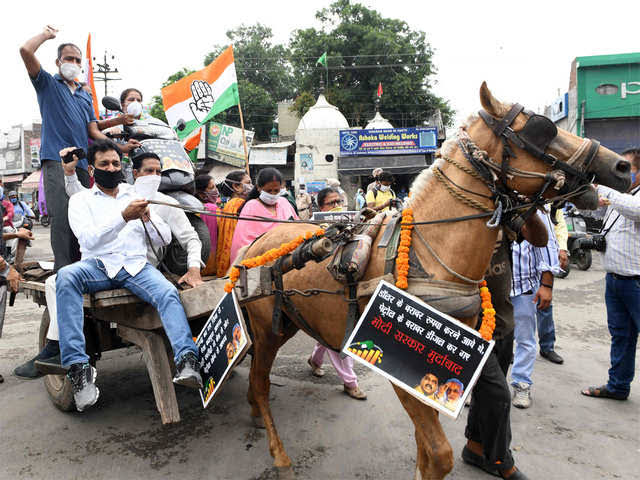 On the call of General Secretary Priyanka Gandhi, UP Congress demonstrated by driving tongas and bullock carts in different districts of the state regarding the ever-increasing prices of petrol, diesel and LPG.

Congress workers demonstrated in the districts under the leadership of district presidents against the central government demanded a reduction in prices. Demonstrations were held in Lucknow from Parivartan Chowk to Vidhan Sabha in which a large number of workers reached and raised slogans against the government. During this, elaborate security arrangements were made and a large number of police forces were deployed.

On this occasion, Lucknow Metropolitan President (North) Ajay Srivastava Ajju and Metropolitan President (South) Dilpreet Singh jointly said that due to the failures of the BJP government at the Centre, the plight of the general public is getting worse today. The prices of essential commodities including petrol and diesel are increasing exponentially.

The BJP government has become insensitive due to skyrocketing prices and inflation. The BJP government at the Centre is continuously lying and claiming to have free vaccines, and in return it has been recovered by loosening the pockets of the public from the tax levied on petrol, diesel and cooking gas. In fact, the price of petrol has gone up to about Rs.100 per litre across the country, diesel has also become very expensive, due to which there is resentment among the public. Ajay Srivastava Ajju said that Ekka and Tonga are symbols that the BJP government has pushed the country back. After the second wave of the corona disaster, the Prime Minister, Narendra Modi has cheated the poor and middle class families of the country by talking about giving free ration to the people. He said that at this time the public should have been the first to get relief from inflation, but on the contrary, by increasing the prices of mustard oil, cooking gas, petrol, diesel and other essential commodities, the common people have been brought on the road. Dilpreet Singh said that now the time has come that it has become very important to bring the Congress government in 2022 because without change of power, now the public cannot be good. He said that if the rising prices and excise duty are not brought down, there will be a huge agitation very soon.