Ukraine outraged as female military forced to march in heels 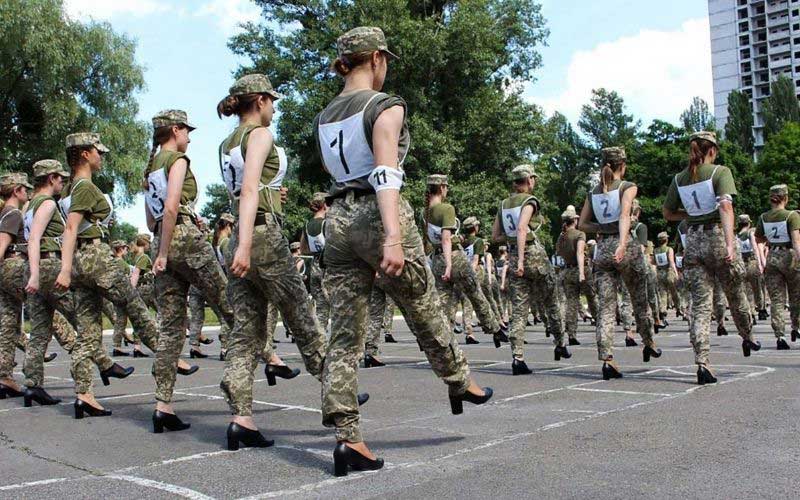 Ukrainian authorities were caught in a controversy after official photos showed female soldiers practising for a parade in high heels.

Reportedly, Ukraine is planning a military parade next month to commemorate 30 years of independence following the dissolution of the Soviet Union, and the defence ministry has posted pictures of fatigue-clad women troops parading in mid-heel black pumps.

"For the first time, training is taking place in heeled shoes today," cadet Ivanna Medvid was reported as saying by the defence ministry's website ArmiaInform.

"It's a little more difficult than in army boots, but we're trying," Medvid said in a comment released on Thursday.

The choice of footwear prompted outrage on social media and in parliament, prompting charges that female soldiers had been sexualized.

Several Ukrainian legislators allied to Ukraine's previous president, Petro Poroshenko, arrived in parliament with pairs of shoes and persuaded the defence minister to wear high heels to the parade.

"It's difficult to imagine a more ridiculous, damaging concept," said Inna Sovsun, a Golos party member, citing health dangers. She also emphasized that Ukraine's women troops, like men, are putting their lives in danger and "do not deserve to be ridiculed."

Ukraine has been fighting Russian-backed rebels in the country's industrial east since 2014, in a conflict that has killed over 13,000 people.

Olena Kondratyuk, a deputy speaker of the assembly, stated that authorities should publicly apologise for "humiliating" women and launch an investigation.

According to Kondratyuk, around 13,500 women have fought in the present conflict. And, over 31,000 women already serve in Ukraine's military services, including more than 4,000 of them serving as officers.