Bindumadhav Thackeray was the eldest of the three sons of Balasaheb Thackeray. Although he has never been active in politics. 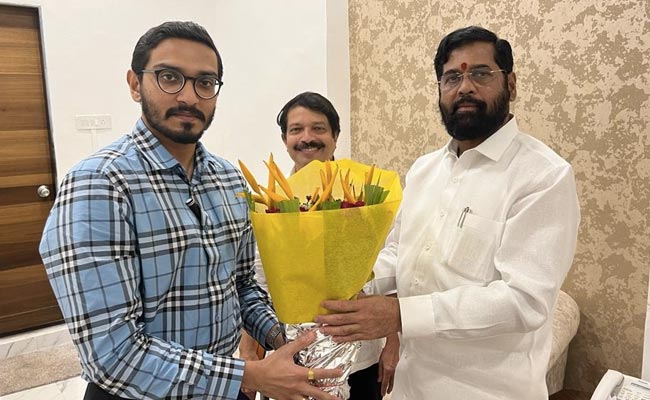 Amidst the ongoing tussle in Shiv Sena, Uddhav Thackeray and his faction have suffered another major setback. Uddhav Thackeray's nephew Nihar Thackeray met CM Eknath Shinde on Friday. During this meeting, Nihar has also sought his support. This meeting has happened at a time when CM Eknath Shinde and his faction have been asserting their authority over Shiv Sena for a long time. They believe that according to the majority in a democracy, it is decided who is in power or whose party belongs to whom. At present we have this majority, so we should have right over Shiv Sena. However, the matter is still with the Election Commission. The Uddhav faction and Shinde faction have already sought the intervention of the Election Commission in this matter. On the other hand, if we talk about Uddhav Thackeray's nephew Nihar Thackeray, then he is the son of Bindumadhav Thackeray. Bindumadhav Thackeray died in a road accident in 1996. Bindumadhav Thackeray was the eldest of the three sons of Balasaheb Thackeray. Although he has never been active in politics.

A few days ago, the daughter-in-law of the Thackeray family, Smita Thackeray, met Chief Minister Eknath Shinde and wished him well. Speaking to reporters on this occasion, Smita Thackeray had said that Eknath Shinde is an old Shiv Sainik, so today she had come to wish him well on becoming the Chief Minister. On being asked that you are a member of the Thackeray family and in the politics that is going on today, you have come to meet Eknath Shinde? Smita Thackeray had said that I have known him for a long time. I respect the chair in which he is sitting today. I also know his work and I know how much work he has done in Shiv Sena. I didn't see the family, just came to wish them well.

Smita Thackeray was the first wife of Bal Thackeray's son Jaidev Thackeray and was once close to Balsaheb Thackeray. Now she lives separately. There is also a film production company of Smita Thackeray.