During the protest of the lawyers, a demand for hanging was also made. According to reports, the mob attacked both the accused outside the Jaipur court. 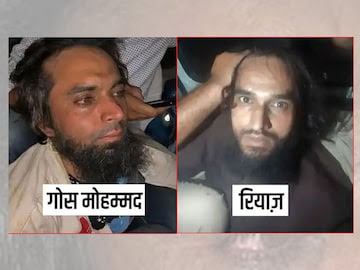 In the case of ruthless murder of Tailor Kanhaiyalal, the mob attacked the two accused outside the Jaipur Court today. 48-year-old Kanhaiyalal was murdered on Tuesday by two people, they also made a video of the incident. Later Riyaz Akhtari and Ghos Mohammed shared another video in which they bragged about the murder and also threatened to target Prime Minister Narendra Modi.

Two more people who were allegedly involved in the conspiracy to raid Kanhaiya's shop and murder him were also arrested later. The court today allowed the National Investigation Agency to extend the custody of the accused till July 12.

A few days before his murder, Kanhaiyalal told the local police that he had received threats on a social media post shared from his account. He was apparently "supporting" suspended BJP leader Nupur Sharma's remarks on Prophet Mohammad. The Anti-Terrorism Investigation Agency is also probing the murder of a chemist in Maharashtra's Amravati. After this matter came to light, it can be linked to her social media post supporting Nupur Sharma.