The Noida-based company started the Emerald Court project in the mid-2000s. Under this project, located near the Noida and Greater Noida Expressway, there was a plan to build a building consisting of 3, 4 and 5 BHK flats. 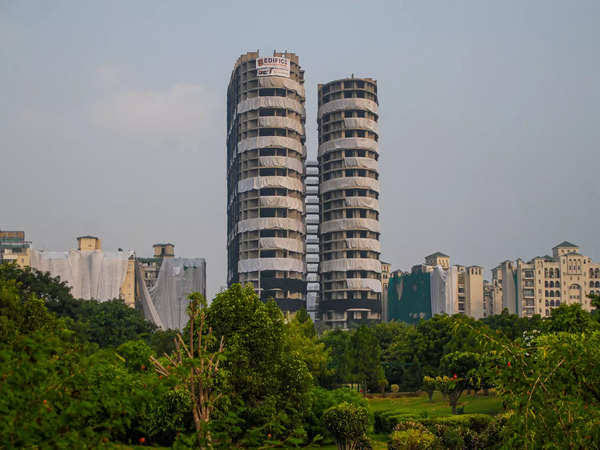 p>Supertech's illegal twin tower in Noida will be demolished today. The final inspection of the explosives and related arrangements for the demolition of the 40-storey building was done on Saturday. Officials said that all the work of installing and attaching the explosives has already been completed. He said that only the work of connecting the twin towers and laying 100 meters long cable wire from the structures to the 'exploder' is left.

The Noida-based company started the Emerald Court project in the mid-2000s. Under this project, located near the Noida and Greater Noida Expressway, there was a plan to build a building consisting of 3, 4 and 5 BHK flats.

As per the plans submitted by the New Okhla Industrial Development Authority, the project was supposed to have 14 nine-storey towers. However, the trouble started when the company changed the plan. Till 2012, instead of 14, 15-storey buildings were built in the campus that too nine not 11 storeys.

Apart from this plan, another plan was started, in which two more buildings were to be built, which were planned to be made 40 storeys. In such a situation, a legal battle started between the company and the local people. Supertech had promised to build a 'green' area in front of Tower One.

According to documents submitted to the court by December 2006, it was in the plan that was first revised in June 2005. However, later the 'Green' area became the land on which the Cien and Apex Twin Towers were to be built. The third revision of the building plans took place in March 2012. The Emerald Court was now a project, consisting of 15 towers of 11 storeys each. Also the height of the Cayenne and Apex was increased from 24 storeys to 40 storeys.

The occupants of the Emerald Court took note of this and demanded that the Cayenne and Apex be demolished as it was being built illegally. The residents asked the Noida authority to cancel the approval given for their construction. The residents then appealed to the Allahabad High Court, upon which the court ordered the demolition of the towers in April 2014. However, Supertech appealed against the decision and the matter reached the Supreme Court. The Supreme Court of India, in 2021, ordered the demolition of the Noida Twin Towers, citing the fact that the towers were constructed illegally. After this, Supertech appealed to the Supreme Court to review its order. Several hearings related to the case took place in the top court. The hearing also included concerns about the safety of Emerald Court residents. However, the court did not change its decision.