Homage to M. F Husain: My rendezvous with the barefoot billionaire

Remembering Husain on his 10th death anniversary today, whom India failed miserably but continues to reap the harvest of the fortunes he left 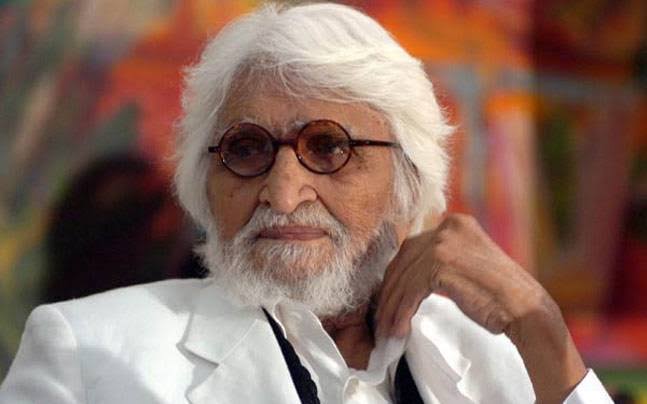 Today is the 10th year of Maqbool Fida Husain’s absence on the art horizon, and this void will only increase.

The legendary painter - lovingly called M. F. Husain, who took India on the global map, is slowly being forgotten by his own motherland.

My memories of the legendary artist are countless. I used to visit him and almost every show in Delhi he did, whether in a barsaati, or a big or small art gallery, or a five star hotel. M. F was a precious gem for all those who had/has his art works but these very people who prided themselves by mounting his works in their shows, did very little to bring the legend back to India in his last days after he was hounded out of the nation for “hurting Hindu sentiments”.

Few of these gallery owners now pride themselves in having a Husain as their money minting possession!

I can never forget Husain saab talking to me briefly over the telephone when he was in Dubai after he sought refuge in Qatar I asked him, “We miss you Hussain saab. Please come back”.

He said with a chocked voice, “Aap bulaiyya na”!

So much was hidden in that voice, that tone! An appeal to make the Indian government and courts act against self-professed protectors of Hindu religion. Though the court has suspended all the warrants against him but the government failed him by not providing him with the protection in the country that he ascended to the global map with his sheer hard work and dedication.

The shunters only remembered that he painted some gods and goddesses in a profane manner, which I endorse, is wrong but did they not remember how he painted a series on Indian civilisation, Ramayana, Mahabharta, Mahatma Gandhi, Mother Teresa and the British Raj? His motifs of Indian urban and rural life, his introduction of a style par excellence in modern cubism, in which he refrained from dull hues, which is a signature of modern styles but made them bold, vibrant and diverse that led him to become among the most celebrated and acclaimed international artist across the globe, and this made India proud?

The Padma Shree, Padma Bhushan, Padma Vibhushan and recipient of countless prestigious national and international awards, whom Jordanian Royal Islamic Strategic Studies Circle named among 500 most influential Muslims in the globe, in the year 2010, remained a no body for the Indian government on the pretext that he painted some Indian deities and Bharat Mata nude in his creations, in 1997 and 2006, really?

Husain repeatedly urged he had no intentions create profanity but he painted the status of education as hollow by depicting goddess Saraswati almost bare and Bharat Mata being in tatters due to communal differences. But, his words were never believed and he kept on escaping from several law suits filed against him in Indian courts, for which he allegedly never appeared in the courts for a hearing either.

The country shunned him. He had to seek refuge in Qatar, take Qatari citizenship in 2010. And he died on June 9, 2011, at 95 following a heart attack.

He had been unwell for several months. Husain took his last breath at the Royal Brampton Hospital in London, and was buried in Brookwood Cemetery next day. Till his last breath, he wished and attempted to come back to his country of birth and wanted to be buried next to his parents, but India couldn’t even do this much for a dying soul.

In fact, after Husain's death, Shiv Sena Chief Bal Thackery allegedly said that he (Husain) “slipped” only in the depiction of the Hindu gods and goddesses….If his demise is a loss for modern art, then so be it…!”

This is how our legendary artistes are treated by the right wing Hindu groups; political outfits support this. And it continues till date.

I don’t endorse anyone insulting any religion’s sacred figures but being shunted out from the country reeks of a scheme, a plan for which our country’s government was badly criticised. If we can forgive a rapist and make him enter the Parliament as peoples’ representative, forget and elevate the engineers of genocide in the name of religion, political outfits who gobble up crores from the taxes and sarkari funds and teach their children abroad, why not forgive an artist who apologises and says he had no intentions to hurt anyone, and made his country attain a global status by his sheer hard work and dedication, who brought foreign currency in India by selling for highest at the Christies auction? (His highest-selling piece fetching $1.6 million at a 2008).

Our celebrated artist Satish Gujral also his friend, did criticise him for those creations but also moaned forced exile which he termed as “mob culture”.

Forcing an Indian to die in a foreign land due to such mob culture is a crime too, bigger than what Husain painted “unintentionally” as he had declared. It’s the planned failure of a system and it clearly shows that we are an intolerant nation and we cannot protect our own artists from a fake propaganda.

The propaganda that has followed us till date. Husain was unfortunate as Bahradur Shah Zafar, who was ditched by his own folks

Sorry Husain saab; your own India failed you, while you never failed it. It is still reaping the harvest of your dedication and loyalty by selling your creations for fortunes!