"In the year of global protests, they (India) are in the midst of the biggest one anywhere," The Daily Show's Trevor Noah said. 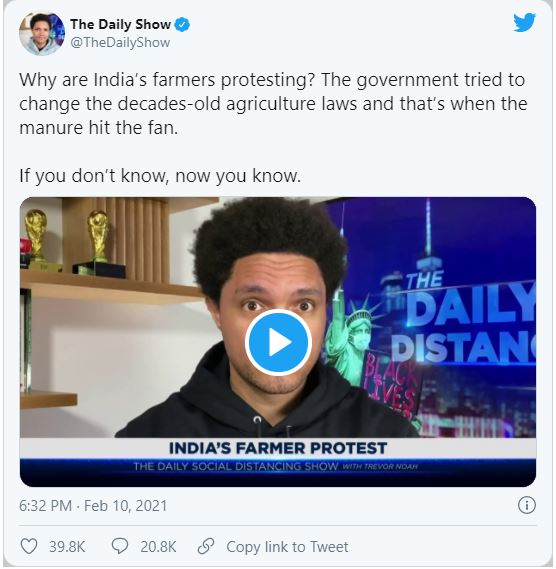 India, a country which always wanted an international endorsement for its actions, quests and successes was bountifully endowed with it with the ascend of its 14th Prime Minister Mr Narendra Modi to the seat of Power. The current Indian Prime Minister crisscrossed the world map and created ripples. Well if not all its citizens, definitely for some.

But now the scales seem to have turned the other way. Indian Governments recent few actions have created a change in the outlook – from praise to questions. The actions in Kashmir, then the Students protests, to the CAA/NRC Movement to now that the Farmers who are up in cudgels – the wheel seems to have turned a full circle.

The latest to join this bandwagon is US comic Trevor Noah. Noah, the Emmy-winning presenter, spent a little over eight minutes talking about the massive agitation in his signature style. The Daily Show has a viewership of around 56 million and with this Noah has ensured that the issue has been brought to the full gaze of the world on India's ongoing farmer protest.

Noah in the segment "If you don't know, now you know" says, "In the year of global protests, they (India) are in the midst of the biggest one anywhere."

Thousands of farmers have been protesting in India for long but of late since they have besieged the Capital New Delhi demanding an immediate repeal to the three farm laws passed by the Parliament in September, the world has woken up to their agitation. After the Republic Day, and its untoward incidents, the protests have intensified.

Using visuals and what media has written about the protests, the International Celebrity said “Damn! When a country that hot starts burning sh**, you know they aren't messing around."

Using satire to its full and to bring the International audience upto date he shared what Greta Thunberg had tweeted on the issue and how the authorities in India had gotten into a frenzy to discredit her tweets. He even quipped that the Swedish environmentalist would be angrier more due to the burning of her effigy, by some supporters of the ruling party, as it would add to the “carbon emissions.”

He even took the issue at hand – that of the politics and economics – the very reason of the protest. In his own comic way he brought out a comparison of the farm holdings in India with that of US and their economic comparison. He used media reports to explain what most of the farmers feel and the importance this sector has on the Indian economy. He even added, "And it is when the (Indian) government tried to change that up that the manure hit the fan."