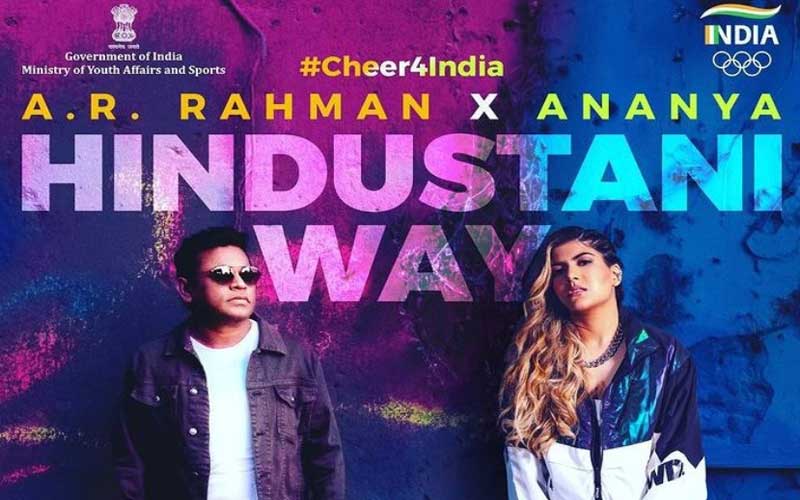 the scene from the anthem

Music maestro A R Rahman and Ananya Birla teams up to create India’s official cheer song for Tokyo Olympics 2020. The title of the song is “Hindustani Way” was launched by Union Sports Minister Anurag Thakur on Tuesday and said, “Let me thank Ananya and A R Rahman for taking the initiative. I want every Indian to listen to it, share and cheer for India.

It is often true that in India, sports is religion and international festivals, a pilgrimage. The fervour is right on point as thousands of countrymen: families, colonies, cafes hook themselves to the television screen or radio sets rooting every second for the country to win. Sports are one of those occasions that help us unite over a national identity which is otherwise shrouded under distinctions of state, religion and caste. The Hindustani way anthem released ahead of Tokyo Olympics 2020 to cheer the country captures the spirit of sports in India.

The featured video of the song includes archival footage from Atlanta 1996, Athens 2004, Beijing 2008, London 2012, Rio 2016 and also some exclusive training footage of this year’s contingent.

The song has a global flavour with “Indian roots” in it, said Ananya Birla.

Rahman has composed many other sports anthems for India including “Jiyo Utho Badho Jeeto” for 2010 Common Wealth Games and “Jai Hind India” ahead of Hockey World Cup 2018.

With an infectious beat, characteristic of Rahman, inspiring visuals of the never die spirit of our players, and the young voice of Ananya Birla, the Hindustani Way is sure to be played again and again in the coming months.

(With inputs from Alvira Nasir)