Delhi Government Will Develop A Hostel At Chhatrasal Stadium At A Cost Of Rs 20.92 crores

On Friday, Deputy Chief Minister Manish Sisodia laid the foundation stone of a residential hostel at Chhatrasal Stadium. 64 rooms will be made for the players and their coaches in this five-story hostel. The hostel will be equipped with a 2 mat wrestling hall, medical room, physiotherapy center, gym, steam bath along other state-of-the-art facilities. The construction work of the hostel will be completed in about 16 months. 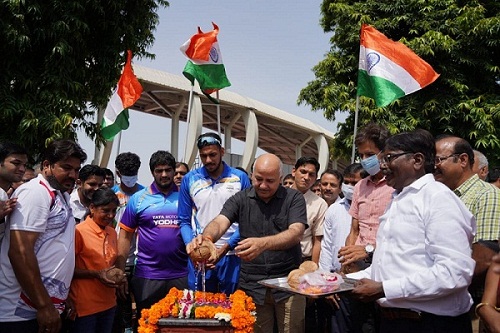 New Delhi: Delhi Government is committed to promoting sports in Delhi and providing better facilities to the players and their coaches. In this direction, on Friday, Deputy Chief Minister Manish Sisodia laid the foundation stone of a residential hostel at Chhatrasal Stadium. 64 rooms will be made for the players and their coaches in this five-storey hostel being built at a cost of Rs 20.92 crore. The hostel will be equipped with a 2 mat wrestling hall, medical room, physiotherapy center, gym, steam bath along with other state-of-the-art facilities. The construction work of the hostel will be completed in about 16 months. Deputy Chief Minister Manish Sisodia said that players will be benefitted by the construction of hostels and they will be able to concentrate on their sports and training while staying in the stadium. Shri Sisodia stated that Chhatrasal Stadium has so far given 5 Olympic medals to the country in wrestling. With these modern facilities, hostels and coaching, the stadium will further prepare world class wrestlers for the country. On this occasion, Deputy Chief Minister Manish Sisodia also honoured the players. The players thanked the Delhi government for the financial support received under the Mission Excellence and Play and Progress scheme during the training.

On this occasion, Deputy Chief Minister  Shri Manish Sisodia said, “Sports players who bring medals are honoured and receive prizes in crores, but when the players sweat during the training in the field before bringing the medal, they are supported by the Delhi Government. Players who have the potential to rise in Sports are being supported by Delhi Government's 'Play and Progress' and 'Mission Excellence' program. Under this, financial assistance is given for excellent training and coaching and sports equipment so that dreams of our players do not stop due to paucity of money. Under the 'Play and Progress' program, the Delhi Government provides assistance of up to Rs 3 lakh to the players at the junior level. Under the 'Mission Excellence' program, players above 17 years of age are given assistance of up to Rs 16 lakh during their training. So that the players can get the best training.”
Shri Sisodia said, “In our schools, playing is not considered a subject of learning, whereas the game of a player is his real education. Keeping this in mind, Delhi Government is preparing to open Delhi Sports University and Delhi Sports School. The aim of this university is to provide world-class facilities to the players. The sports of the players enrolled in this university will be considered as their education.”

Sarthak Bhambri who represented India in 4x400m relay in Tokyo Olympics, said, “Delhi Government is doing a lot of work for sports in Delhi. With the construction of a hostel in Chhatrasal Stadium, the players will be benefited a lot and they will be able to concentrate on their training better while staying in the stadium. Deputy Chief Minister and the Chief Minister also speak to me over the phone from time to time to encourage me.”

Amoj Jacob, who represented India in the 4x400m relay at the Tokyo Olympics, said, “I am getting the benefits from Delhi Government's Mission Excellence Scheme from 2018. This has helped me in bettering my diet and training. In 2018, I got injured during the game, due to which I had to leave the country for the treatment and during this time, the Delhi Government supported me immensely. Stadium and synthetic tracks have been constructed at different places by the government, so that I can now train near my home instead of traveling long distances to the stadium.”

Anirudh Kumar, who won a bronze medal in the free-style World Junior Wrestling Championship in the 125 kg category, says that the Mission Excellence Scheme of the Delhi Government has helped him a lot during his training and he never had to leave his training due to lack of money.

Track Latest News Live on thenationalbulletin.in and get news updates from India and around the world