Timothée Chalamet: The God of Fashion Has Arrived, Bare-Back This Time !!!

We're certainly manifesting a bottle of Chalamet to quench our thirst 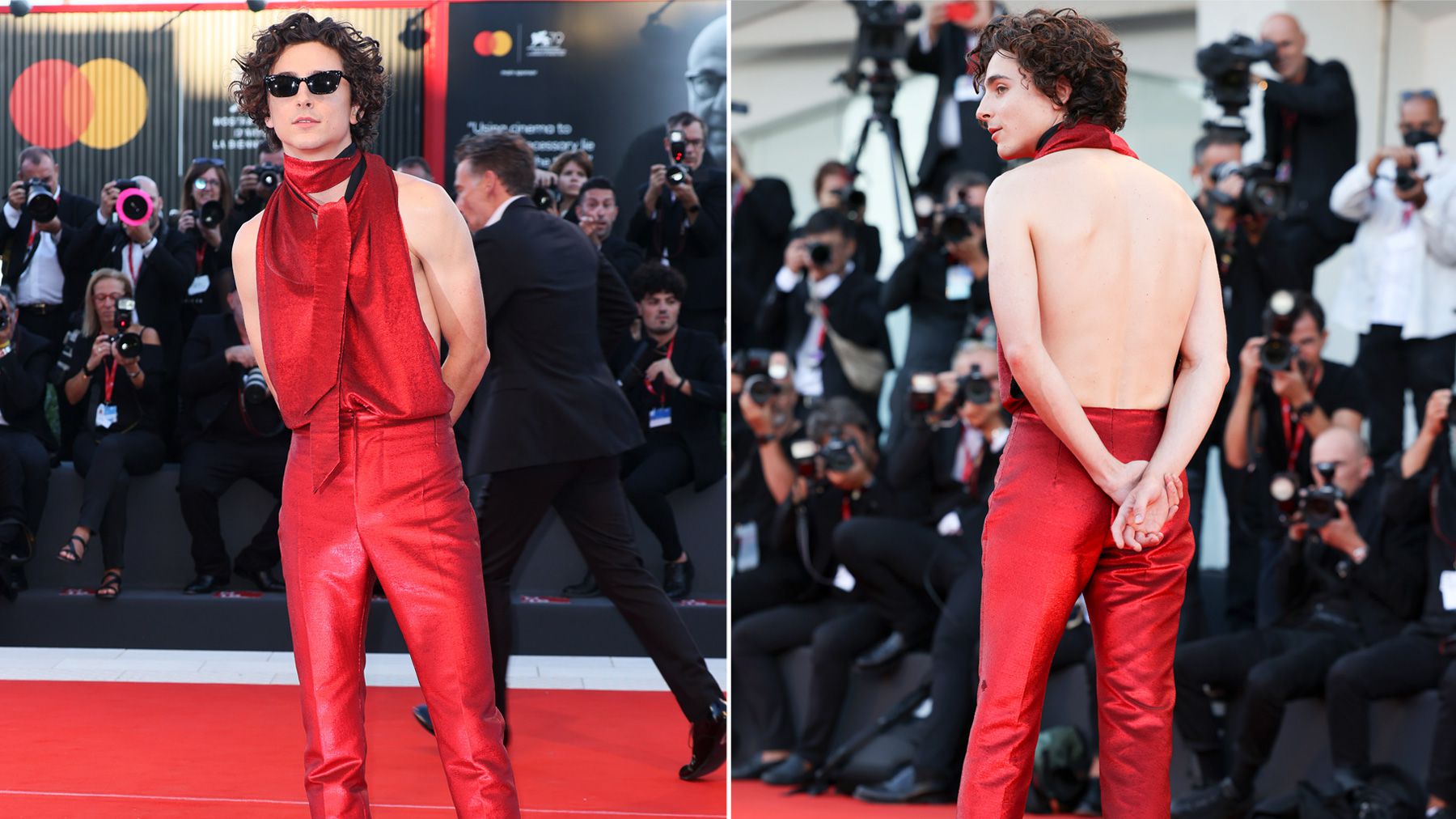 He may have a jawline anyone would love to be slaughtered by, but that’s not the only thing about Timothée Chalamet worth drooling over. With movies like Call Me By Your Name, Little Name, and Dune on his resume, and an acting ability beyond his years, Chalamet’s Ensemble Choices can be deemed “Chef's Kiss”. We’d certainly like to make an appeal to call "Finesse" by his name.

Well, the Red we prefer is usually Taylor’s Version, but Timmy in Red is a sight we could get used to. Now we know Jennifer Lawrence couldn’t stop thirsting, cause honestly, we can’t either.

At the ongoing Venice Film Festival, the actor’s custom-made Haider Ackermann's, “Backless Halter Neck” Red Ensemble became the talk of the town. We might or might not have stared at his pictures and video snaps for hours.

The Dune actor attended the premiere of his upcoming movie, "Bones And All", and we cannot help but wonder if the red hues of his garment are a reference to Blood and Cannibalism, which the movie contains. Well, it’s Timothée, we’d love to play subjects to his savagery, no questions asked.

Not only did the shade resemble the bestial narrative, but the outfit also blurred the conventional line between masculinity and femininity, similar to the premise of sexuality described in the film.

Netizens couldn’t stop talking about the attire, with some even comparing the demeanor to Pooh’s iconic look from Kabhi Khushi Kabhi Gham. A user wrote, "When timothée Chalamet walks past you backless and the world just stops." We certainly agree.

The movie is directed by Luca Guadagnino (Call me by your name) and the eerie discourse has already made the fans seek more. In a scroll-obsessed generation, the plot of the movie (and Timmy) has made the audience halt, in a good way. Both the protagonists, Taylor Russell and Timothee, are limb-chewing cannibals. The film follows cannibalistic lovers, Maren (Taylor Russell) and Lee (Timothée Chalamet), as they embark on a road trip across 1980s America. Though whimsical, the eerie ballads of the teaser have us hooked, and we cannot wait to watch. Also, the sight of Red-Haired Chalamet in his ripped jeans, crunching cigarettes had our toes twirl.

"Bones and All” is based on the novel of the same name by Camille DeAngelis. In an interview, Guadagnino said, “The second I read it, I said, I think only Timothee can play this role. He’s fantastic, a great performer, and to see him soaring the way he is doing now, I feel proud of him. And this character is something very new for him, both endearing and heartbreaking.” In the end, the movie received an 8.5-minute standing ovation, the longest and most enthusiastic of the festival so far.

We cannot wait for the movie to shatter more records !!! With that said, common besties, let's treat ourselves with a Thirst-Trap, shall we?

It's certainly unhealthy the number of times we watched this clip of his. We're certainly manifesting a bottle of Chalamet to quench our thirst.

Girl, we love you Taylor, but we'd be lying if we said, we weren't envious.

Well, observing the trend of concealment disappearing, we'll be eagerly waiting for his next Red Carpet Appearance.

In a press interview, he said, “It’s Taylor’s movie. She does a beautiful job." What a GENTLEMAN.