The students of medical college in Thrissur created a history yesterday with a befitting reply to communal forces, quite musically 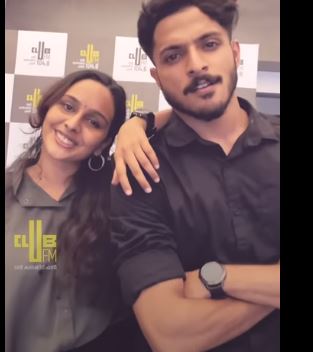 The students of medical college in Thrissur created a history yesterday with a befitting reply to communal forces, quite musically.

Two medical students Janaki Omkumar and Naveen K Razak from Thrissur Govt. Medical College have become social media stars after their dance video went viral on the Internet yesterday night, while it was soon wrapped into controversy with a befitting reply by the future medicos.

An MMBS Final year student Naveen R Razzak and a third year student Janaki Omkumar danced on the famous “Rasputin” number in the dead of the night at the medical college lobby its its Akiya College Union. The foot-tapping dance of the duo , wen viral. The duo seem to have a great camaraderie as they dance their way to internet stardom within few seconds.

Soon enough, an advocate called Krishna Raj cautioned the family of Janaki OmKumar saying he was smelling a rat there, as the boy dancing is a Muslim and they should ask their daughter to stay away from him in order that they don’t witness an eventuality in futrure, meaning indicatively a love relationship followed by marriage between the two in future and some more fateful events.

This is how the keeper of the law, Krishna Raj, cautioned

As soon as the caution came, more students of Thrissur Medical College came in support of the two and uploaded the video on the same number imitating the duo’s dance movements in their ward dress, with a climax that is slap on the face of the communal advocate. It said #resisthate. Soon, the college’s Facebook page went viral with the dance of the two and the group inside the medical college, with millions of viewers and supporters.

Another post followed from the college which has a digital cartoon of Janaki and Naveen. It reads;

“To you, those who eat communal poison, morals..This is not the world or students who know the religion of man and serve..Love Jihad against Janaki and Naveen will be strongly confronted by those who raise shouts and make defamatory remarks.

Beware, those who add cop to communal polarization”

It went with several hashtags such as