Thousands of pensioners reminded the Prime Minister of his promise, saying, ' He has to make an announcement on 15th August from Red Fort in Delhi' 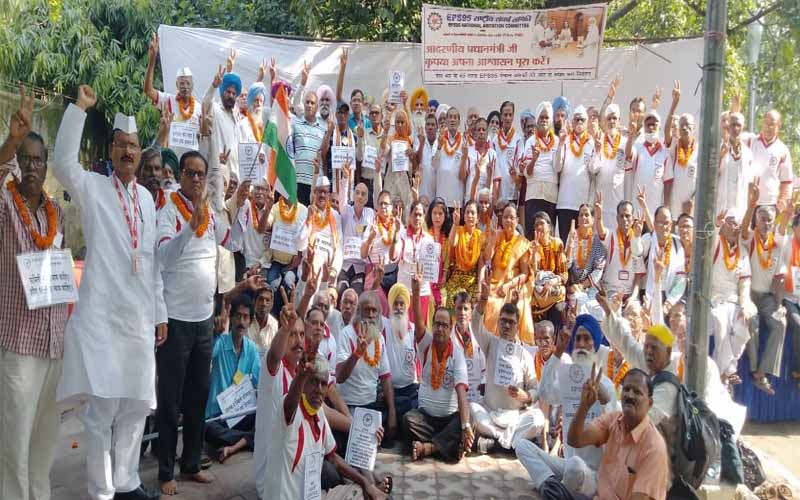 Pensioners of EPS-95 demonstrated their demands at Ramlila Maidan in Delhi. Thousands of aggrieved pensioners from all corners of the country took part in it. This nationwide agitation has been started by EPS-95 against EPFO ​​and Ministry of Labor. It is to be known that 75 people went on a fast unto death at Jantar Mantar in New Delhi.

The four-point demands of the NAC have not yet been accepted. Pensioners agitating under NAC are demanding increase in minimum pension to Rs 7,500 per month along with dearness allowance under the Employees' Pension Scheme (EPS-95) of EPFO. Along with this, there are other demands including giving option of higher pension to EPS-95 pensioners, providing free medical facilities to all EPS-95 pensioners and their spouses.

Commander Ashok Raut, Convener of Rashtriya Andolan Samiti said, “Our Sangharsh Samiti has been fighting for the last 5 years to get justice for EPS 95 pensioners. Today, despite getting assurances from the Prime Minister twice, our demands have been kept hanging. Police dogs are given pension in Andhra Pradesh, third gender pension in the country, but we have been pushed to the margins. The MLAs and MPs of the country have pension, but we do not, where is this justice? Rs 1171 is not enough for us to live life with self respect. By getting 7500 pension, we can live our life with self-respect. We urge Prime Minister Narendra Modi ji to take action on this serious issue only on 15th August. If the demands are not met, then we have decided that we will not rot, we will die fighting. We are just fighting for our self respect. This is not a political issue. The government should immediately implement our demands."

An 82-year-old pensioner from Maharashtra said, “We have come this far on our money only so that the government listens to us. We do not survive in 1000-500. We deposited money in the pension fund throughout our life. This is being treated with us today. It is very unfortunate that when the country is celebrating the nectar festival of freedom, the elders of the country are fighting for their rights. They are being treated step-motherly."

An elderly woman protester said, “One, our service was terminated very quickly. The above pension is so low that it is very difficult to run a household. Many women live alone, many are widows, they hardly make a living. Children throw them out of the house saying that we are a burden on them. The government should take quick cognizance of this matter and we should get relief at the earliest. We should get at least the deposit amount that we have.”