With the help of Solan district administration and technical staff of Timber Trail, the stranded tourists were rescued. 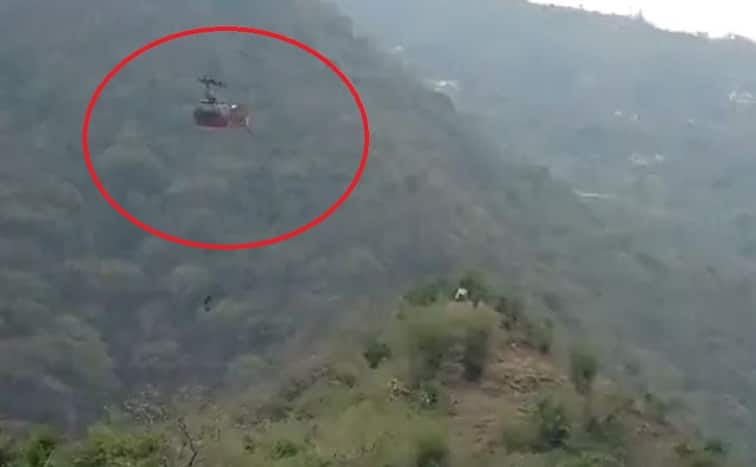 On Monday, 11 people were trapped in the Timber Trail ropeway (cable car) at Parwanoo in the Solan district of Himachal Pradesh. All the people have been safely rescued with the help of rope. The trolley was stuck in the air for more than five hours. At the same time, during the rescue operation, there was a long jam on both sides due to the traffic stop on Shimla-Chandigarh National Highway. With the help of Solan district administration and technical staff of Timber Trail, the stranded tourists were rescued. At the same time, the team of NDRF has also reached the spot.

The administration was engaged in boosting the morale of the people trapped in the trolley. After the rescue, the health check-up of the people who were evacuated was done. At the same time, Chief Minister Jai Ram Thakur himself instructed to evacuate all the people soon. The Chief Minister himself also tweeted and talked about going to the spot. During the rescue operation, a large number of people gathered near the ropeway. It is being told that the trolley was hanging in the air at a height of more than 120 meters from the ground. The people ejected from the trolley are very nervous.

About 800 meters from the Timber Trail near Parwanoo, the state entrance, is the Timber Trail Resort on a hill. People reach the hotel via ropeway. There was a technical fault in the trolley at around 11 am on Monday. Since then the trolley hangs in the air. According to the State Disaster Management Authority, all the people were rescued by rope. Some people were afraid to descend through the rope. Because of this, it became challenging to rescue them.

The people trapped in the trolley are said to be from Delhi. There are also many elderly among them, who were feeling nervous in descending through the rope. The people trapped in the trolley themselves kept appealing for help by making videos. According to DC Solan Krutika Kulhari, the NDRF team was called for rescue. The team got involved in the rescue as soon as the team reached the spot.