The TNB decided not to do the story, without verifying the sequel to the Zomato-tale, But sit, pause and analyze the incident in its entirety. 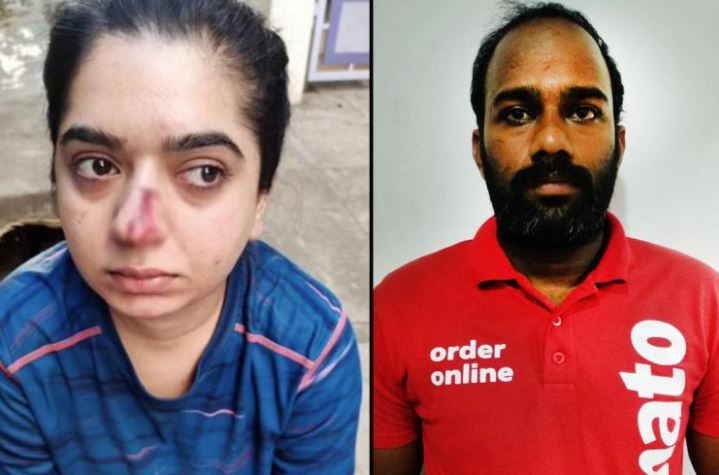 And this had to happen. That’s why we, at the TNB, decided not to do the story, without verifying the sequel to the Zomato-tale doing million rush rounds on the internet since yesterday.

Here is a quick recap and ouropinion.

Soon after a girl from Bengaluru, namely Hitesha Chandranee made a video, with wet eyes that she was punched at her nose by the hurly-burly Zomato delivery boy, namely Kamraj, and sought help, her story went viral.

The crying girl said in the video that she refused to take the “late delivery” and started talking to the “customer support”asking why the delivery was late. But the boy, enraged, tried pushing himself inside her slit-open door and keep the food. As she refused, he punched her nose which started bleeding. Helpless then, she made that video,

The girl, a makeup artist and fashion designer by profession, cried to the viewers to make the video viral and help her get justice. A sympathy wave followed and the judgemental lot flung to abuse the boy, Zomato and relate their own horrifying tales, while some retained sanity to know the whole truth

On the other side, when the Zomato boy from Kerala, was interviewed, he said, while breaking down towards the end that, yes he reached bit late, buthe apologised frequently to the girl, politely and requested her not to complain as it would affect his job. But as he was late, she wanted the food free, and also complain alongside. She also asked her to keep the food on the table kept outside the door. The boy said that it was a cash on delivery item, so he won’t be able to leave the food. He picked it back and moved to the lift. He adds that the girl opened the door, wouldn’t let him close the lift and also started hitting him with slippers.

“To which,” the boys said, “I got very scared, and tried shutting the lift door. “It hit her hand and not the nose.” Since she was close to the lift trying to stop him run away with the food, and he was trying closing it, her ring that was wearing hit her nose in the process, and it started bleeding.

“I didn’t punch her sir. Still the police arrested me, took me to the police station. I am out now, but I need to be present whenever called,” Kamraj broke down while saying he felt utterly insulted and humiliated at being hit by “chappals” and falsely implicated for punching her.

The explanation by Zomato

Now, what do we gauge of this situation? Who to believe who to not?

The first thing here is tolerance! The second, jumping into ‘punishing’ someone via public support and third, no show of humility

The incidences of people greedy of “free food” on just five to 10 minutes of late delivery has become a new fad among many. Some do it for fun, and falsely implicate the deliverer and enjoy free meal,ever since cooked food delivery had made its presence in India. The food brands/outlets pressurise the delivery boys to deliver at an unreal estimation of a perfect timings, without taking into consideration, the road situation or other eventualities. That puts high pressure on the delivery boys. They know if they do not deliver the food on time, their salaries would be cut and on repeat ‘offence’ their appraisal would be marked with red.

I have multiple examples of restaurant owners trying their best to give finest services, as much as the delivery boys taking advantage of a road trip, that is often punctuated with a stoppage for a fag or a quick meeting with a friend

Geeta Rai who used to own a restaurant called Aroma Foods at sector 137 Noida, has a tale to tell. It recounts her unpleasant memories with customers.

“On slightest of late delivery, or any small inadequacy in the food, the customer would not only shout over the telephone but use indecent language too. Some even would ask for free, yet extra sauce, salads, chutney, curd and rice. At times, for a mere Rs.100 a thali, customers would fight with me on why the plate wasn’t rich enough to match up with a five star restaurant. For a small amount they would make the delivery boys stand at their doors for long, some even asking them to go back and bring extra items again, to get the payment.”

A constant repetition of such incidents from people living in posh societies including Paras Tierea (sector 137) and surrounding areas forced Geeta to, “finally shutter down the restaurant and take up a regular job.”.

“I am much relieved now,” she says while adding the delivery boys also used to take undue advantage. “They would take a nap in the society parks after delivering the food, which I would get to know by the grass and soil stuck to their T-shirts,” she laughs.

Tolerance, is the key to any human behaviour. TNB feels, if the food was s bit late, the boy could be given a warming than made hue and cry about, and complain about him to affect his job amid covid-induced poor employment situation.

As far as my understanding goes, the boy, as one can see his interviews strewn over the internet, doesn’t appear like the one who would hit a woman. The people from Kerala are known to be the humble and less assertive.

However, often the delivery boys do lie about the traffic on the road which they say had caused the delay, and keep on repeating the excuse with the customers who don’t’ complain. There is no sure short way of telling them to be honest with their job, except that a company takes care of them well and they fear losing employment, hence

Ms. Zinnia Nandi, a Delhi-based Tarot reader says that after knowing Zomato incident, she would be more cautious about the delivery boys, and make sure she doesn’t pick up a fight with them.

She also says that often such food apps do not a customer care support. Instead, they ask customers to write an email, to which they answer at leisure.

She recalls an incident when she ordered food from Delhi for her 80-year-old grandma who lives in Mumbai as a New Year treat. “The food was pathetic. So I called up the person who took my order. He said, he wouldn’t be able to help. Instead, I had to write an email complaining about the food. I wrote an email and received a response, three days later, asking me to send the pictures of the food! Should my old grandma had saved the food expecting a response in as many days?” she fumes

Ms. Nandi also makes a valid suggestion that all the restaurants owners/ food apps makers should have an ‘identity column’/question’ in which they should ask whether the food is to be delivered to a female and/or a senior citizen, and train the delivery boys’ sensibilities accordingly .A well-behaved delivery boy will bring trust on the app/ brand too, she advises.

I feel even females can be trained as delivery women, during day times.

However, tolerance is the key in any such incidents. Once I asked Ms. Kiran Bedi, the first female Inspector General of the Tihar Prison (1993 to 1995), known for her prison reforms, of what was bad about people on the roads?

She said, “Lack of tolerance. And it would be worst in future. If a man is walking on the road and a cycle/scooter walah hits him mildly, even by mistake, without seeing anything, he just slaps him and takes out all his days’ aggression on him. This needs to be handled in ‘tolerance classes’ as we also do in Tihar jail”. Her prison reforms, we all know, have won her immense applause across the globe.

Its time, we all introspected, and be a bit more humane.

The Zomato story reveals an intolerant and depressed society.