The elections in West Bengal have turned from a political competition to a prime-time entertainment that is grabbing the eyeballs. 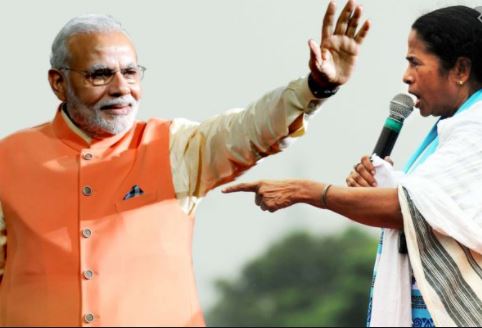 ITS NOT A BATTLE BETWEEN mAMTA AND MODI BUT MAMATA AND SUVENDU ADHIKARI, WHOSE NAME PUBLIC DOESN'T EVEN REMEMBER

The political narrative of West Bengal elections has changed completely. The high voltage campaign and do or die situation for both BJP and TMC has electrified the campaign trail. Political exodus at regular interval from TMC has no doubt perturbed the leadership of TMC. The BJP is trying everything in its kitty to stop Mamata making a hat-trick in Bengal. This time the pulse of Bengal polls is on “KhelaHobbe” on binary of Jai MaaDurga versus Jai Sri Ram.

According to Praveen Rai, who is a Political Analyst at the Centre for the Study of Developing Societies, Delhi, “The elections in West Bengal have turned from a political competition to a prime time entertainment that is grabbing the eyeballs of the television viewers across India. The reason for the Bengal elections being in the public spotlight is mainly due to hyper-aggressive campaigning by the TMC and the BJP that combines contentious religious polemics with empty political rhetoric. The binary of “Jai MaaDurga” versus “Jai Sri Ram” seems to have set the pace and time will tell who finally wins the “Khela” (Game) of competing religious narrative.

“A preliminary scan of the electoral battlefield reveals that the TMC stands a faint chance of winning a hat-rick in Bengal due to four reasons. One, the TMC is facing strong anti-incumbency sentiments with a significant number of its leaders jumping the BJP bandwagon. Two, the appointment of a political consultant by TMC and the rolling of welfare policies at the last moment may not be enough for payback by a majority of voters. Three, the BJP will encash on Modi’s pan-Indian vote fetching charisma, and his penchant for high scoring in slog overs. Finally, the recital of Hindu mantras by Mamata in her rallies may not stop the religious polarisation of the Hindu electorate for the saffron party, but may counter-fire and lead to the fragmentation of her steadfast Muslim support, said Rai.

On the impact of wheelchair campaign by Mamata, Rai said, “The opinion polls reveal that TMC is in the Driver’s seat. However, they can go wrong as the violent ecosystem and fear in Bengal may result in high response errors. Indian politics has seen several election turnarounds due to emotive factors. So it is possible, that Mamata may evoke a Sympathy Wave due to her leg injury, feisty wheelchair campaign and ride back to power with a clear majority.”

On the fast changing dynamics of Bengal polls, AfrozAlam who is presently working as Professor and Head, Department of Political Science at Maulana Azad National Urdu University (MANUU), Hyderabad and is also the Director (I/C) of Centre for the Study of Social Exclusion and Inclusive Policy (CSSEIP), MANUU, Hyderabad said, “For very long years, the elections in West Bengal were fought on local, confrontational and ideological narratives. The national politics was of no sway. But the rise of BJP in 2019 was a dynamic shift that ended the regional flavour of Bengal politics giving way to Hindutva nationalism. With 40 per cent vote share in 2019, BJP may claim an edge in at least 120 of 294 assembly seats in 2021 election. The gain of BJP is not an overnight gain as can be proven in the consistent rise of the saffron party occupying many runner up-spots and increased vote-shares in previous LokSabha, Assembly elections as well as local elections of Gram Panchayat, ZilaParishad and Municipal Boards.”

“If BJP wants to win this election, it has to further dent Left-Congress vote base along with taking at least 2 per cent of AITC votes to its favour. If AITC has to win, it has to regain not only the lost ground in districts like Coochbehar, Jalpaiguri, Darjeeling, Uttar Dinajpur, Maldah, Bankura and Purulia but also to let Congress-Left regain their traditional votes while taking at least 2 per cent of BJP votes to their advantage.

Who so ever may win 2021 Assembly Election of West Bengal; it is going to be very exciting. Both AITC and BJP have put their entire stake in this highlycharged election. On the one hand, BJP deployed all top to bottom (national and regional) leaders, co-opted after defections many AITC/Left/Congress leaders to its fold, build campaign narratives along nepotism, corruption, unruly behaviour of AITC workers, killing of BJP workers, Hindu bashing, Muslim appeasement during Mamata Banerjee’s 10 years rule. In a word, the larger narrative of BJP is ‘MamataHatao,” argued AfrozAlam.

On the possibility of Mamata retaining power for the third term, Alam said, “AITC has assessed its 2019 failure correctly and refashioned its style of politics and campaign to meet the challenges of the rising saffron surge. There is a party-restructuring, campaign become more professional and targeted on ‘Bengali Asmita’ and ‘Bengal kiBetiMamata’, welfare schemes for the marginalised and so on; Briefly, it is the the larger narrative of AITC is ‘MamataBachao’. Above all, in my calculation, AITC will be able to retain West Bengal with reduced number of seats. BJP will occupy the space of dominant opposition (a win-win situation). Left-Congress will remain a political fringe. Will Mamata Banerjee be ableto sustain her victory for full 5 years with volatile majority, is the most important question for me.”