The Vice Chancellor of BFUHS resigned, demanded this from CM Bhagwant Mann

The incident is being told on Friday, when Jauramajra was inspecting Guru Gobind Singh Medical College and Hospital. 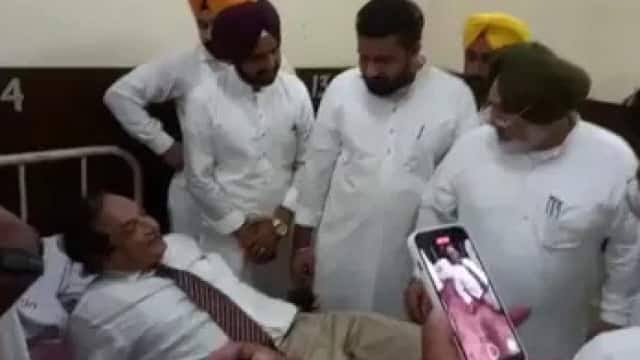 In a video of the incident viral on the internet, surgeons are seen placing a hand on Bahadur's shoulder and forcing him to lie down on the same mattress, pointing to the poor condition of a mattress kept in the skin department of Jauramajra Hospital. In the video, the Vice-Chancellor is seen explaining to the Health Minister that he is not responsible for these facilities, to which the Aam Aadmi Party (AAP) leader said, "Everything is in your hands."

However, after the incident, the Vice Chancellor told CM Bhagwant Mann that he cannot work in such an environment and he should be relieved from services. The Vice-Chancellor said on Saturday that he was feeling humiliated by such behavior on the part of the minister.

On the question of resigning from the post of Vice-Chancellor, he said, "I have conveyed my pain to the Chief Minister and said that I feel humiliated." According to sources, the Chief Minister has spoken to Jauramajra, taking a strong stand on the incident. Mann has also asked Bahadur to meet him next week.

Meanwhile, the minister has faced criticism from various quarters, including the Indian Medical Association (IMA). The PCMS Association, an association of doctors in Punjab, has also issued a statement strongly condemning the alleged indecent behavior with the Vice Chancellor.