The suspension of members was unpleasant but inevitable: M Venkaiah Naidu

In his concluding remarks before Rajya Sabha was adjourned sine die, eight days ahead of the schedule, Naidu said while it was the right of the opposition to protest, but the question is how should it be done? 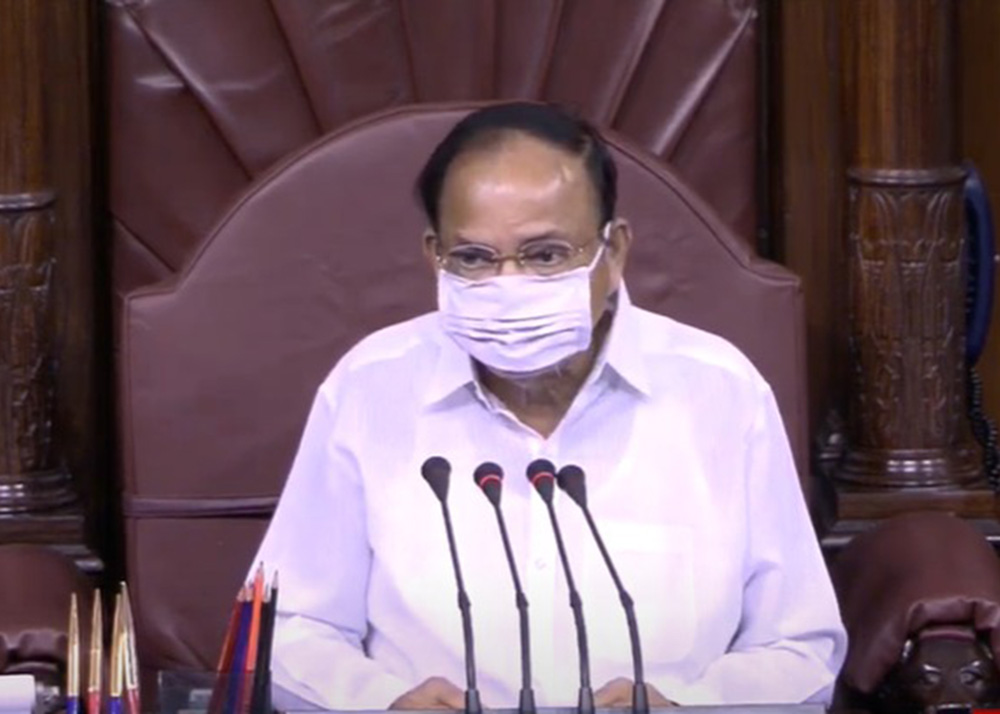 The Chairman of Rajya Sabha, M Venkaiah Naidu said that he was duty-bound to uphold the dignity of the rules, standards, and values of the Upper House although the suspension of members was not a pleasant thing to do.

The Rules of the House do provide for such suspension when it becomes inevitable, he pointed out.

In his concluding remarks before Rajya Sabha was adjourned sine die, eight days ahead of the schedule, Naidu said while it was the right of the opposition to protest, but the question is how should it be done?

Pointing out that the floor of the august House was the most effective platform for the contestation of ideas, he said that if the boycott is done for a longer period, it amounts to leaving the very platform that enables members to effectively convey their ideas, besides contesting those of others.

Referring to the letter he had received from the Leader of Opposition, Ghulam Nabi Azad, and others urging the House not to pass the three labour codes, the Chairman said that there have been a number of precedents when the business was taken up as per schedule and bills were approved in the wake of boycott or walkout by some members.

In this context, he cited the passage of the Finance Bill and Appropriation Bill in 2013. Naidu said that had the letter suggested the postponement of the bill by stating that they would attend the House, he would have discussed the issue with the government.

He said that there was no such assurance. On the other hand, some of the members justified what they had done. Therefore he decided to go ahead with the bills, he said.

Observing that though the session was satisfying in terms of productivity, he said there have been some areas of concern as well. “We need to collectively ponder over these issues for making a difference in future”, he added.

The Chairman said that for the first time in this history of this august House, a notice of motion was given for the removal of the Deputy Chairman and it was rejected. He pointed out that the mandatory 14 days advance notice was not given.

Referring to the developments surrounding this unprecedented move, he said they have been deeply painful for all those who hold the stature and the dignity of this august House dear to their hearts. He appealed to the members to ensure that such unseemly behaviour was not repeated.

Though it was not the first time that some members were suspended and Bills passed when some sections of the House boycotted the proceedings, he said “I find it extremely unpalatable. This kind of a situation needs to be avoided by all means”.

Observing that he has been associated with the august House for the past 22 years, Naidu said that he gets anguished whenever bills are passed in the din. “I am naturally more pained to see that happen as the Chairman of this august House. It hurts me the most when the Chair is rendered helpless by the turn of events and has to perforce take action against the members as per the Rules” the Chairman added.

The Chairman sought to remind the members that twice, in 1997 and 2012, the august House has resolved that all the members will uphold the dignity of the House by complying with the Rules and Procedures. He said that it was the responsibility of all members to ensure the smooth functioning of the House “so that we can fulfill our commitments to the people”.

Observing that the 252nd session of the Rajya Sabha was marked by several novel features induced by the outbreak of novel coronavirus, he said the House had 10 sittings and functioned from six different locations including the chambers of both the Houses of Parliament and four galleries of this House, a first of its kind in the history of Rajya

Stating that the Rajya Sabha was concluding 8 sittings ahead of the scheduled 18 sittings as the COVID-19 pandemic continues to challenge humankind, he said “we are living in extraordinary times warranting several adjustments requiring us to live a new normal life”.

He said that written replies were given to a total of 1,567 unstarred Questions during the 10 sittings, while the members raised issues of urgent public importance through 92 Zero Hour and 66 Special Mentions. Besides, the members discussed important issues of the outbreak of the COVID-19 pandemic, its consequences and management, and the developments along the border in Ladakh.