The Rohingya refugees also deserve empathy to fight the pandemic

We were persecuted in our country but here we expect to be treated like all other citizen but unfortunatly that has not happened. Instead we are harrased occasionaly and we remain in constant fear 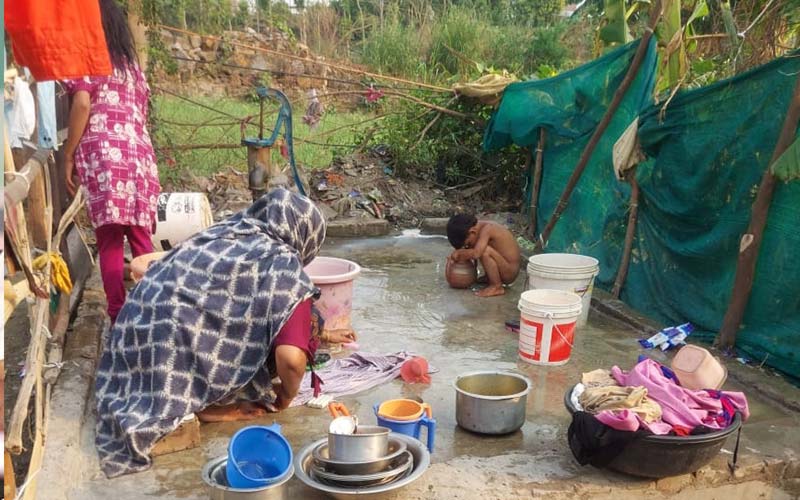 The terrible life, pain and suffering of Rohingyas is known to all but unfortunately Covid-19 has further aggravated their miserable life and grievances. Their situation has further deteriorated during the pandemic in the absence of healthcare facilities and proper vaccination drive. The refugees also deserve empathy from the establishment to fight the pandemic.

As per estimate, there are 40 000 Rohingya refugees in camps across India. Of them, around 18 000 refugees are registered with the UNHCR in India. There are about 900 Rohingyas living in Delhi in camps in various parts of Delhi. Rohingyas are devoid of national and international rights and also the guidelines of World Health Organisation(WHO) on health of Refugees and migrant. With financial constraint and no requisite documents, the Rohingya refugees are fighting their own battle with the pandemic. Most of them are labourers, rag pickers or run very small shops.

Mohd Haroon is aslo one of them who is living in Kanchakunj refugee concentration area. He is living here since 2012 and runs a small vegetable shop there. In this camp, there are 55 families now. “Earlier,when pandemic began around four to five doctors came here to do test but no one was diagnosed Covid positive. I have UNHCR card but that is not enough to get vaccinated. The UNHCR is talking to government to allow all UNHCR card holders to get vaccinated, said Haroon.

“Last year we had received ration twice but this year we have not received anything. We were persecuted in our country but here we expect to be treated like all other citizen but unfortunatly that has not happened. Instead we are harrased occasionaly and we remain in constant fear, he said.

Haroon added, “My sister has spinal problem. She needs to be operated. Last year the operation cost was over one lakh but this year it has further increased to around 1 lakh 80 thousand. We hardly earn our daily bread how can I manage this.”

According to United Nations Rohingyas are the most persecuted communities in the world. As a result, they deserve better treatment not only during the pandemic but also during normal situation. They live in small concentrated areas and do not have access to basic amenities. They are more vulnerable to Covid-19 because of unhygienic living conditions. In order to provide them basic facilities, first of all it is important to consider them as humans and not as people living in no-man’s land.

According to Ravi Nair, Director South Asia Human Rights Documentation Centre, “India has ratified the International Covenant on Economic, Social and Cultural Rights Article 12; (c) in it clearly states, “The prevention, treatment and control of epidemic, endemic, occupational and other diseases; (d) The creation of conditions which would assure to all medical service and medical attention in the event of sickness.” is a state responsibility. The prohibition of discrimination is linked to the right to health. Discrimination is, first of all, a right on its own – the right not to be discriminated against, is enumerated among civil rights. The discrimination against Rohingya refugees is clearly violative of Article 14 of the Indian Constitution as well as International law.”

Nair added, “The World Health Organisation (WHO) in its note on Refugee and migrant health is clear.

“It is therefore critical for national health systems and policies to address refugees’ and migrants’ right to health, regardless of the legal and migratory status. Doing so requires active collaboration across the different sectors and close cooperation between governments and the many non-state actors involved in the migration process. By not providing vaccination against Covid to Rohingya refugees in India, the Union government is not only violative of international law but also does not belong to the comity of civilized nations.”

On the plight of Rohingyas and helplessness of Civil Society, “John Dayal, noted Social and Human Rights Activist said, “The plight of the Rohingyas was terrible even in normal times. Harassed by non-state actors of the right wing Islamophobic groups, denied refugee status by the United Nations, sought by the local police, denied housing by both private landlords and civil authorities, and third children growing without education and proper Medicare. I have had occasion to document their plight myself. National leaders have often called them terrorists.”

“What is happening to them in Jammu at the height if the second phase of Covid makes their plight an assault on the national conscience, which alas has been deadened by the constant obscenities coming from the highest in the land and through the administrative apparatus at their command? Civil society is helpless. Covid has exhausted the people. The only thing in which we can hold hope is for the Supreme Court to intervene and make the authorities extend to the Rohingyas empathy, compassion and the healthcare and sustenance they need. Their further harassment should invite penal action,” added Dayal.

“Rohingya issue should be as seen as humanitarian matter and should not be seen from communal angle. Sadly, our government has taken steps to stop them by issuing notification on the implementation of CAA with immediate effect. Catholic Church across globe which has migrants’ policy of its own in Bangladesh are doing what they can to help the hundreds of thousands of Rohingya refugees fleeing neighboring Myanmar,” said A C Michael, Christian activist for Human Rights and former member of Delhi Minorities Commission.

“Despite the willingness and good intentions of the Catholic Church in India, the church is unable to do anything about it as it would be violation of law of the land. But as an ordinary citizen of this country I appeal upon Church leaders and civil society to unitedly impress upon government of the day to practice our country’s age-old tradition of “Atithi Devo Bhava”! and accept all refugees irrespective of one’s faith,” the former member of Delhi Minorities Commission said.