Durand Cup Football tournament will be played from September 5 to October 3, 2021.A total of 16 teams are vying for the Champions title and besides the defending champions, ISL franchise Kerala Blasters are the second team from the southernmost state known for its football fanaticism. 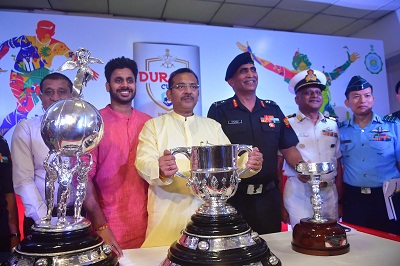 Kolkata: Kolkata – the Mecca of Indian Football, has been now officially confirmed as the home of the Durand Cup– the oldest club football tournament in Asia, for the next five editions. Addressing the media at Fort William during the unveiling of the iconic Durand Cup trophies in the presence of Aroop Biswas  Minister for Sports & Youth Affairs, Power in the Govt. of West Bengal and Lt. General Kamal Repswal Chief of Staff, HQ Eastern Command, SM, VSM made the announcement confirming the City of Joy as hosts.

In the previous 129th edition, held for the first time in the city, Gokulam Kerala emerged champions, beating Mohun Bagan 2-1 in front of a packed stadium, to register their first silverware in club history. They are back to defend that title. A total of 16 teams are vying for the 130th Durand Cup Champions title and besides the defending champions, ISL franchise Kerala Blasters are the second team from the southernmost State known for its football fanaticism.The ISL is well represented with Bengaluru FC, FC Goa, Jamshedpur FC and Hyderabad FC joining the Blasters. The century-old Mohammedan Sporting, the tournament’s The first Indian winner will represent the local challenge along with fellow I-Leaguers Sudeva FC of Delhi and of course Gokulam. A second team from Delhi and Bengaluru, Delhi FC and Bengaluru United bring up the second division challenge while the Army also has two teams in the form of Army Green and Army Red. The Indian Air Force, The Indian Navy, The Assam Rifles and CRPF are the other four teams in the tournament to be played from September 5-October 3, 2021.

Shri Biswas clarified on attendance norms for the 130th Durand Cup and mentioned to the press that there will be minimal attendance in the stands at the beginning of the tournament, owing to the Covid-19 pandemic.

“The WB Govt. has allowed 50% capacity inside stadiums but the Durand Cup tournament committee, in light of the pandemic has decided to allow minimal attendance and then gradually towards the end of the tournament, if everything goes well, we will allow 50% attendance in compliance with government norms during the latter stages”, he said. On the other hand, General Repswal (Chief of Staff, HQ Eastern Command, SM, VSM) confirmed Kolkata as the home of the Durand Cup until 2025. “The 129th edition of the Durand Cup was held in Kolkata in 2019. The kind of response the tournament got in Kolkata was immense, with tremendous amount of support from the state government. I must mention it because of every department of the state govt. went out of their way to ensure the tournament becomes a success. “You will all be very happy to know that for the next five years, Durand Cup will be conducted in Kolkata.” General Repswal also confirmed that the Hon’ble Chief Minister of West Bengal, Ms. Mamata Banerjee will be in attendance for the inauguration and opening match of the 130th Durand Cup on 5th September at Vivekananda Yubabharati Krirangan (VYBK). Only behind the English FA Cup and Scottish Cup (starting in 1871 and 1874 respectively) in terms of inception, the first-ever Durand Cup took place in 1888 – making it the oldest-running club football tournament in the world, and the oldest running football tournament in Asia.

Traditionally organized by the Indian Army on behalf of our Armed Forces, this year onwards The government of West Bengal will join as joint-hosts and led by Shri. Biswas, have been at the forefront in all aspects of organizing the tournament. Shimla served as hosts in the earlier years of the Durand Cup before the tournament shifted base to New Delhi in 1940. In 2019 however, the tournament returned after a three-year absence but to its newest home – Kolkata. This year, the 130th edition of the legendary tournament will commence again, where it will remain for the next five years. Draped in such rich footballing heritage, coupled with an unadulterated passion for football amongst the people of the State – the city of Kolkata rightly does justice as home to a tournament as historic as the Durand Cup.

Three leading footballing venues of the State have been identified for the 130th Durand Cup, namely the Vivekananda Yuva Bharati Krirangan (VYBK) and the Mohun Bagan Club Ground in Kolkata as well as the Kalyani Municipal Stadium Ground, which has been regularly hosting national level football matches over the past few years.