Once a TMC Rajya Sabha MP, Mithun had to resign in a mere 2 years after his name cropped up in the Saradha chit-fund scam investigation 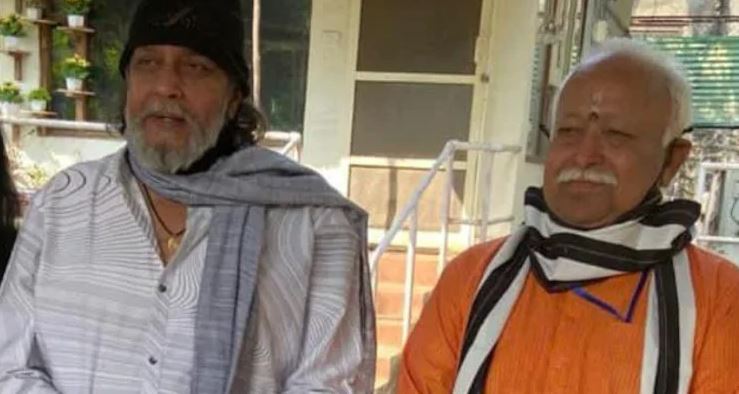 Just before the crucial Bengal Assembly elections a breakfast meeting of RSS ideologue Mohan Bhagwat with Mithun Chakraborty is being viewed by many as yet another strong move by the right-wing in strengthening their position in the TMC bastion.

Rashtriya Swayamsevak Sangh Chief Mohan Bhagwat met the 70 year old Bollywood Star Mithun Chakraborty at his Madh Island bungalow in the suburbs of Mumbai. This is not the actor’s first meeting with Bhagwat. In recent times a series of such meetings suggest that the actor, a former All India Trinamool Congress Party (AITMC) Rajya Sabha MP, may announce his joining BJP soon.

Even though Chakraborty has evaded the question with, “I have a spiritual relation with him. It is a very deep spiritual relation. There was a plan that he would come to my home when he visits Mumbai. It so happened that I returned to Mumbai from Lucknow after a shoot and he too is in Mumbai. So we connected."

"When one visits home, it is assumed that he must love me and my family. He asked me to bring everyone to Nagpur. That's all we discussed. He had breakfast. There was no rajneeti (politics), nothing," Chakraborty added.

The BJP has scored many defections from the Trinamool Congress, including some of its sharpest political strategists, but is still widely seen to lack a face in Bengal. Mithn Da, as the actor is affectionately addressed, has a huge fan following in the state and he might be pitted against the popular Mamata Di.

Watching the recent developments one of his fans Anirban Sarkar from Hoogly quipped “Dada has danced his way out of many occasions earlier but this time he seems to have chosen the wrong track for his moves. I will continue to support him but am not sure of the rest of my friends.”

Many are dumb founded in the state how could their favourite Mithun Da change his stripes so soon. “First an Urban Naxal, then a left government supporter, then a TMC MP – the state will not accept him in another avatar so soon,” says Kaushik Basu from Kolkata.

Zain Hassan, Hotelier from Burdwan Paschim says, “we all remember the Disco Dancer star when at an Election rally in Asansol in 2014 he in a scathing attack on the BJP for trying to cut into the votes of TMC had raised a slogan, ‘Har Ghar Didi, Baar Baar Didi’ to counter the BJP’s catchphrase, ‘Har Har Modi, Ghar Ghar Modi’”.

But the once the TMC Rajya Sabha MP, Mithun had to resign in a mere 2 years after his name cropped up in the Saradha chit-fund scam investigation, he seems to have started leaning towards the right wing. He had to deposit Rs 1.2 crore, the money he had received from the company for his services, to the Enforcement Directorate (ED).

“BJP is trying hard to control Bengal but the eastern state’s sizeable Muslim minority and its love for the present day Chief Minister Mamta Banerjee might not be able to sway it away from TMC,” says psephologist Krishna Kanta Ghosh.