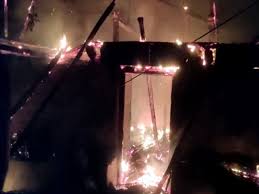 A painful accident has happened in Mancherial, Telangana. Here, 6 people including two girls were burnt alive due to fire in a house. Police said that the incident took place in Venkatpur village under Ramakrishnapur police station area. After the death of 6 people of the same family, there is mourning in the whole area. The information about the fire in the house was given to the police by a person living in the neighborhood. The landlord Shivayya (50) and his wife Padma (45) were killed in the accident, police said. Padma's niece Monika (23), Monika's two daughters and a relative were killed in the accident.

Police further said that all the men lived at Venkatpur in Shivayya Mandmari mandal with their wives at home. Recently Monika came to Shivayya's house with her daughters, everyone was living together. Neighbors saw flames at Shivayya's house at around 12 o'clock on Saturday night. The neighbor immediately informed the police about this.

After getting information about the fire, the fire brigade vehicle reached the spot. The entire house was gutted due to the fire. Police said that bodies of 6 people were found lying inside the house. The police have registered a case in the matter. The cause of the fire is yet to be ascertained. At present the matter is being investigated.