Sushil Modi had also said that Deputy CM Tejashwi Yadav felt that he would become the CM of Bihar and under his pressure, CM Nitish Kumar has decided to buy jet planes and helicopters. 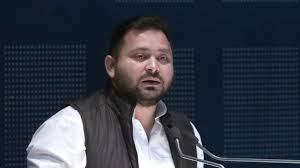 The politics of Bihar has been heated for the last few days regarding the purchase of jet aircraft. Initially, the BJP leaders launched a political attack on the recent decision of the Bihar government. Now Bihar's Deputy Chief Minister Tejashwi Yadav has taken the lead towards the government and is telling lies to the BJP leaders.

Deputy Chief Minister Tejashwi Yadav said that till now we used to take planes on rent, why shouldn't Bihar have its own plane? If the Gujarat government takes a plane, it would have done a good job..If the Indian government had taken a plane worth 4000 crores, it would have done a good job. A plane is taken so that there is no problem in government work. He also said that when Sushil Modi was the Deputy Chief Minister, didn't he sit in the government helicopter? Tell me the name of even one of their (BJP's) central ministers who travel without a jet..this cheap politics are doing.

In the cabinet meeting chaired by CM Nitish on December 27, the proposal to buy a jet plane and a helicopter for VIP leaders and officials was also approved. This decision of the Nitish cabinet was termed wrong by former Deputy CM of Bihar and Rajya Sabha MP from BJP, Sushil Modi and said that the government does not buy jets or helicopters, but takes them on lease. Sushil Modi had also said that Deputy CM Tejashwi Yadav felt that he would become the CM of Bihar and under his pressure, CM Nitish Kumar has decided to buy jet planes and helicopters.